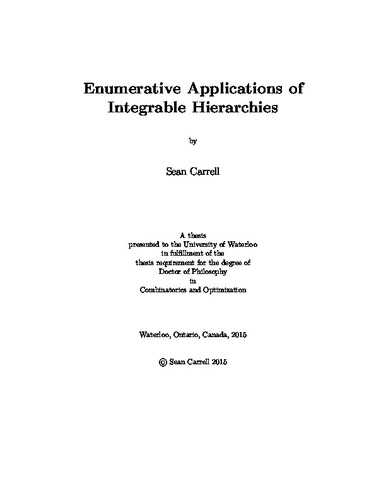 Countably infinite families of partial differential equations such as the Kadomtzev - Petviashvili (KP) hierarchy and the B-type KP (BKP) hierarchy have received much interest in the mathematical and theoretical physics community for over forty years. Recently there has been much interest in the application of these families of partial differential equations to a variety of problems in enumerative combinatorics. For example, the generating series for monotone Hurwitz numbers, studied by Goulden, Guay-Paquet and Novak, is known to be a solution to the KP hierarchy. Using this fact along with some additional constraints we may find a second order, quadratic differential equation for the generating series for simple monotone Hurwitz numbers (a specialization of the problem considered in corresponding to factorizations of the identity). In addition, asymptotic analysis can be performed and it may be shown that the asymptotic behaviour of the simple monotone Hurwitz numbers is governed by the map asymptotics constants studied by Bender, Canfield and Gao. In their enumerative study of various families of maps, Bender, Canfield and Gao proved that for maps embedded in an orientable surface the asymptotic behaviour could be completely determined up to some constant depending only on genus and that similarly for maps embedded on a non-orientable surface the asymptotic behaviour could be determined up to a constant depending on the Euler characteristic of the surface. However, the only known way of computing these constants was via a highly non-linear recursion, making the determination of these constants very difficult. Using the integrable hierarchy approach to enumerative problems, Goulden and Jackson derived a quadratic recurrence for the number of rooted triangulations on an orientable surface of fixed genus. This result was then used by Bender, Richmond and Gao to show that the generating series for the orientable map asymptotics constants was given by a solution to a nonlinear differential equation called the Painlev\'e I equation. This gave a method for computing the orientable map asymptotics constants which was significantly simpler than any previously known method. A remaining open problem was whether a suitable integrable hierarchy could be found which could be applied to the corresponding problems in the non-orientable case. Using the BKP hierarchy of partial differential equations applied to the enumeration of rooted triangulations on all surfaces (orientable or non-orientable) we find a cubic recursion for the number of such triangulations and, as a result, we find a nonlinear differential equation which determines the non-orientable map asymptotics constants. In this thesis we provide a detailed development of both the KP and BKP hierarchies. We also discuss three different applications of these hierarchies, the two mentioned above (monotone Hurwitz numbers and rooted triangulations on locally orientable surfaces) as well as orientable bipartite quadrangulations.