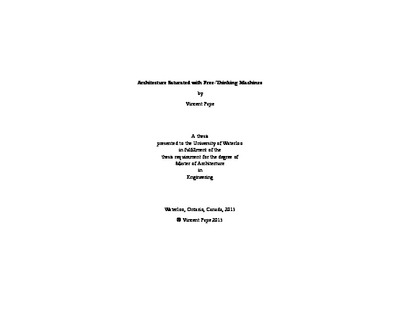 This thesis explores the benefits and disadvantages for human occupants living within intelligent buildings and responsive environments that have developed the autonomy and the ability to make their own intelligent decisions and act on those choices in our place. The thesis is split into two parts. The first half is a discussion of collected research material. It discusses the balance between deskilling and augmenting the skill of individuals as we continue to delegate more mental and physical effort away from our own bodies through our co-evolution with technology. It examines how to maintain human agency within autonomous environments as they become more capable but unpredictable. Finally, it seeks an equilibrium between the need for human privacy and the need for autonomous environments to observe to act intelligently. Through this analysis, it speculates on the eventual form a human-built environment crowded with artificial minds may take; and it describes the potential need for conversational and autobiographical agents to act as intermediaries between the rest of an intelligent environment and its human occupants. In addition to impacts on our own agency, this thesis also discusses the agency of the built environment itself, its moral responsibilities, and what moral consideration it may deserve. The second half of the thesis is a science fiction short story that applies the discussion of the first half of the thesis. This story is inspired by the value of using speculative stories to contemplate future social change and by the narrative form this thesis proposes machine interfaces will eventually take. This story describes a conversation between a mistrustful man burned by the past and an intelligent environment’s artificial caretaker that seeks to regain his approval.