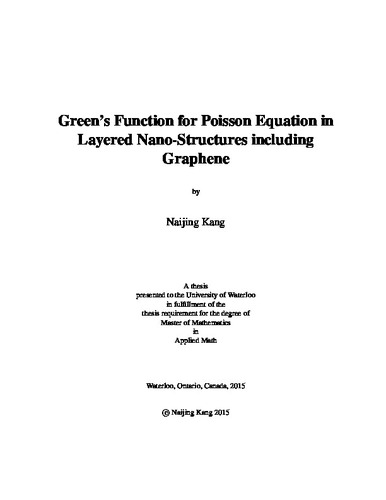 The purpose of this thesis is to focus on the electrostatic properties of graphene-based nanostructures consisting of different materials, as well as their interactions with external electric charges, by solving the boundary value problem (BVP) corresponding to the electrostatic potential with the method of Green's function (GF). In the first part, we derive the Poisson equation and the corresponding GF for electrostatic potential in a layered structure without graphene from Maxwell's equations in the non-retarded approximation, together with the electrostatic boundary and matching conditions at the sharp boundaries between adjacent regions with different dielectric properties from the integral form of Maxwell's equations. Owing to the translational invariance in the layered structure, and taking the advantage of the infinitesimally thin layer of the graphene sheet, we continue to show that the GF for the layered structure with graphene integrated at an arbitrary position can be expressed in terms of the GF of the same structure without graphene by means of Dyson-Schwinger equation. The main goal of this work is to analyze the electrostatic interaction of graphene with external charges and electric fields, mediated by the varying dielectric properties of the surrounding layered structure. As a starting point, we present full expressions for the GF after performing a two-dimensional (2D) Fourier Transform (FT) and applying the method of undetermined coefficients in structures consisting of two and three dielectric layers, where each region contains material with constant dielectric properties. Based on those basic results, a further application of the simple two-dielectric layer structure is then presented, where we consider the case with a randomly rough interface between two infinite dielectric layers. Describing the surface by a random profile function with zero mean, we calculate the average values of the perturbative solution for the undetermined coefficients in the GF to the second order in the surface roughness. Another aspect of our study in the application of the three-layer structure is the dynamic response of a metallic slab due to the polarization by the passage of external charged particles. In this thesis, both the local and non-local descriptions of the electron gas (EG) in the metallic slab are presented in a sequence. In order to introduce nonlocal effects in the local hydrodynamic (LHD) model of the EG, we first introduce the quantum pressure term in the equation of motion for EG, which yields the standard hydrodynamic (SHD) model. By using the GF from a three-layered structure, we solve the resulting second-order wave equation for the perturbed charge density and the Poisson equation for the electric potential. In addition, by further introducing a Bohm quantum potential term into the equation of motion for EG, we arrive at the quantum hydrodynamic model (QHD). As a consequence of the new quantum term being in the form of a gradient correction to the perturbed charge density, a fourth-order wave equation for the density is acquired, which requires additional boundary condition (ABC) in order to form a well-posed BVP. In addition, the dispersion relations arising from the excitation of the collective oscillation of electrons in the thin metal film are studied for all three cases of the hydrodynamic model. Finally, we consider a special configuration of the field effect transistor (FET), where the graphene is implemented between a Stern layer and an oxide layer of finite thickness, with a semi-infinite region above the Stern layer occupied by an aqueous electrolyte containing mobile ions. In this model a nonlinear Poisson-Boltzmann (PB) equation is generated for the electrostatic potential in the electrolyte. After reviewing the construction of a GF for the fully linearized PB equation in the Debye-Hückel approximation, we show that it is possible to solve the so-called partially linearized PB equation by first obtaining an averaged part of the solution for the surface average of all quantities, and then developing a GF for the resulting linear equation with non-constant coefficients describing the fluctuating part of the potential.