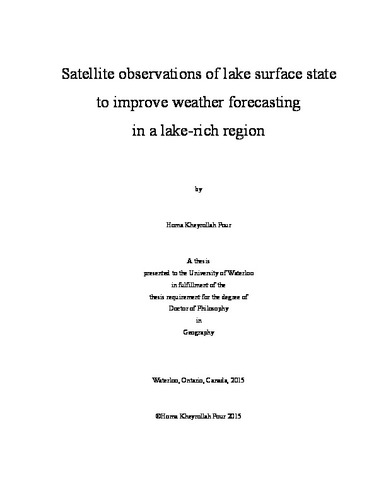 The thermal and dynamic properties of water bodies are important factors affecting the structure of the atmospheric boundary layer which stores and transports energy and mass. The storage and heat transfer of lakes play an essential role in energy and water exchanges with the atmosphere. At high latitudes, the effects of lake ice on climate mostly occur at the local/regional scale, with the degree of influence dependent on the magnitude, timing, location, duration of ice cover and the size of the water body. Ground-based lake temperature and ice observations have been used to investigate the role of lakes in the weather and climate, and the response of lakes to climate. However, in the last two to three decades, it has been observed that the number of ground-based observations, lake ice in particular, has been decreasing dramatically in several countries across the northern hemisphere. In this context, remotely sensed earth observations represent a practical tool in support of the scientific and operational modeling communities, permitting to monitor Lake Surface Water Temperature (LSWT) and ice cover. Data assimilation methods have been used widely to solve the initial value problem in numerical weather prediction (NWP) models. There is a variety of users and applications of space-borne observations in NWP systems; however, not much attention has been paid on the assimilation of remotely-sensed LSWT data in pre-operational NWP environments for improvement of the weather forecast using the optimal interpolation method. This thesis aimed to demonstrate how retrieved remotely-sensed LSWT observations can improve the representation of lake-atmosphere interactions in NWP models. More specifically, LSWT observations were used to improve the representation of lake surface state in the High Resolution Limited Area Model (HIRLAM), a three-dimensional numerical weather prediction (NWP) model. To attain this goal, satellite-derived LSWT observations from the Moderate Resolution Imaging Spectroradiometer (MODIS) and the Along-Track Scanning Radiometer (AATSR) sensors onboard the Terra/Aqua and ENVISAT satellites, respectively, were first evaluated against in-situ measurements collected by the Finnish Environment Institute (SYKE) for a selection of large to medium-size lakes during the open-water season. Results show a good agreement between MODIS and in-situ measurements from 22 Finnish lakes, with a mean bias of -1.13 ˚C determined over five open water seasons (2007-2011). Evaluation of MODIS during an overlapping period (2007-2009) with the AATSR-L2 product currently distributed by the European Space Agency (ESA) shows a mean bias error of -0.93 ˚C for MODIS and a warm mean bias of 1.08 ˚C for AATSR-L2. Two additional LSWT retrieval algorithms were applied to produce more accurate AATSR products. The algorithms use ESA’s AATSR-L1B brightness temperature product to generate new L2 products: one based on Key et al. (1997) and the other on Prata (2002) with a finer resolution water mask than used in the creation of the AATSR-L2 product distributed by ESA. The accuracies of LSWT retrievals are improved with the Key and Prata algorithms with biases of 0.78 ˚C and -0.11 ˚C, respectively, compared to the original AATSR-L2 product (3.18 ˚C). The impact of remotely-sensed LSWT observations in the analysis of lake surface state of HIRLAM forecasting system was then investigated. Data assimilation experiments were performed with the HIRLAM model. Selected thermal remote-sensing LSWT observations provided by MODIS and AATSR sensors were included into the assimilation. The domain of the experiments, which focused on two winters (2010-2011 and 2011-2012), covered northern Europe. Validation of the resulting objective analyses against independent observations demonstrated that the description of the lake surface state can be improved by the introduction of space-borne LSWT observations, compared to the result of pure prognostic parameterizations or assimilation of the available limited number of in-situ lake temperature observations. Further development of the data assimilation methods and solving of several practical issues were found to be necessary in order to fully benefit from the space-borne observations of lake surface state for the improvement of the operational weather forecast. Lastly, the lake-specific autocorrelation function based on LSWT remotely sensed observations was approximated in HIRLAM. A new autocorrelation function of lake pairs was approximated and compared against the original function utilized in current version of HIRLAM to investigate potential improvements demonstrated through HIRLAM sensitivity experiments. The autocorrelation function is calculated based on distance and lake depth differences for each lake pairs. Results show that large lakes are more sensitive to the impact of the autocorrelation. These results also suggest that the high concentrated observations can improve the enhanced result; however, ground-based observations of LSWT are barely available for NWP applications. Overall, results from this thesis clearly demonstrate the benefits of assimilating space-borne LSWT observations into a weather forecasting system such as HIRLAM, and that comprehensive assimilation of LSWT observations can improve NWP results.