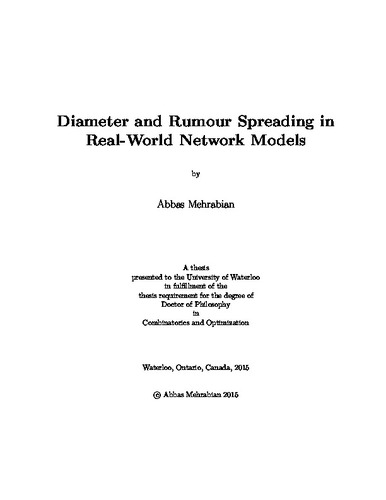 The so-called 'small-world phenomenon', observed in many real-world networks, is that there is a short path between any two nodes of a network, whose length is much smaller that the network's size, typically growing as a logarithmic function. Several mathematical models have been defined for social networks, the WWW, etc., and this phenomenon translates to proving that such models have a small diameter. In the first part of this thesis, we rigorously analyze the diameters of several random graph classes that are introduced specifically to model complex networks, verifying whether this phenomenon occurs in them. In Chapter 3 we develop a versatile technique for proving upper bounds for diameters of evolving random graph models, which is based on defining a coupling between these models and variants of random recursive trees. Using this technique we prove, for the first time, logarithmic upper bounds for the diameters of seven well known models. This technique gives unified simple proofs for known results, provides lots of new ones, and will help in proving many of the forthcoming network models are small-world. Perhaps, for any given model, one can come up with an ad hoc argument that the diameter is O(log n), but it is interesting that a unified technique works for such a wide variety of models, and our first major contribution is introducing such a technique. In Chapter 4 we estimate the diameter of random Apollonian networks, a class of random planar graphs. We also give lower and upper bounds for the length of their longest paths. In Chapter 5 we study the diameter of another random graph model, called the random surfer Web-graph model. We find logarithmic upper bounds for the diameter, which are almost tight in the special case when the growing graph is a tree. Although the two models are quite different, surprisingly the same engine is used for proving these results, namely the powerful technique of Broutin and Devroye (Large deviations for the weighted height of an extended class of trees, Algorithmica 2006) for analyzing weighted heights of random trees, which we have adapted and applied to the two random graph models. Our second major contribution is demonstrating the flexibility of this technique via providing two significant applications. In the second part of the thesis, we study rumour spreading in networks. Suppose that initially a node has a piece of information and wants to spread it to all nodes in a network quickly. The problem of designing an efficient protocol performing this task is a fundamental one in distributed computing and has applications in maintenance of replicated databases, broadcasting algorithms, analyzing news propagation is social networks and the spread of viruses on the Internet. Given a rumour spreading protocol, its spread time is the time it takes for the rumour to spread in the whole graph. In Chapter 6 we prove several tight lower and upper bounds for the spread times of two well known randomized rumour spreading protocols, namely the synchronous push&pull protocol and the asynchronous push&pull protocol. In particular, we show the average spread time in both protocols is always at most linear. In Chapter 7 we study the performance of the synchronous push&pull protocol on random k-trees. We show that a.a.s. after a polylogarithmic amount of time, 99 percent of the nodes are informed, but to inform all vertices, a polynomial amount of time is required. Our third majoc contribution is giving analytical proofs for two experimentally verified statements: firstly, the asynchronous push&pull protocol is typically faster than its synchronous variant, and secondly, it takes considerably more time to inform the last 1 percent of the vertices in a social network than the first 99 percent. We hope that our work on the asynchronous push&pull protocol attracts attention to this fascinating model.