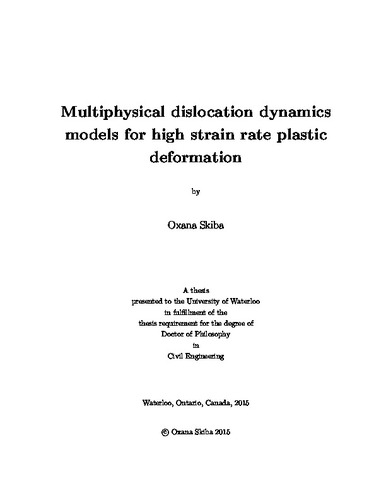 Discrete Dislocation Dynamics (DD) models provide a framework to advance the understanding of plasticity. However, existing DD models currently do not account for multiphysical effects. Multiphysical phenomena are often present during plastic deformation. Two particular examples are the electromechanical behavior of plastically deformed piezoelectric materials and the thermomechanical behavior of metals under high strain rate plastic deformation. Thus, I present two new DD models, that take these behaviors into account. The basic carriers of plastic deformation are dislocations, which are crystallographic defects. Therefore, in the two new DD models, dislocations are directly modeled as crystallographic line defects in an elastic continuum. These models are based on the Extended Finite Element Method (XFEM), which is a versatile tool used to analyze discontinuities, singularities, localized deformations, and complex geometries. The XFEM captures the slip from edge dislocations by way of Heaviside step enrichment function. This paper starts with the first fully coupled two-dimensional electromechanical Discrete Dislocation Dynamics model (EM-XFEM-DD) for anisotropic piezoelectric crystalline solids undergoing plastic deformation. The strong, weak, and discrete forms of the boundary value problem for the coupled system are presented. The computation of the Peach-Koehler force, the force driving dislocation motion, using the J-integral is discussed. The EM-XFEM-DD model for a domain with a single edge dislocation was verified by comparison with the solution obtained using the Finite Element Method (FEM) with Lagrange Multipliers. The piezoelectrical effect on the Peach-Koehler force on a single dislocation in a finite domain is evaluated. This effect is significant and can affect both the direction and magnitude of the force. The motion of a network of dislocations under different electrical and mechanical loads is simulated. The simulations demonstrate that for piezoelectric materials, the plastic response di ffers considerably when various electric potential di fferences are applied. In addition, the simulations illustrate that the physics of plasticity under electromechanical loads are more complex than in purely mechanical systems. Next, the first fully coupled two-dimensional thermomechanical Discrete Dislocation Dynamics model (TM-XFEM-DD) is developed. Since high strain rate plastic deformation leads to significant temperature rises due to the rapid rate of heat generation by dislocation motion, each dislocation is considered as a moving heat source. The strength of each heat source is the work done by the Peach-Koehler force on each dislocation. The TM-XFEM- DD model also accounts for the temperature dependence of dislocation drag. Parametric studies show that the temperature dependence of dislocation drag does not significantly impact the observed stress-strain response at low loading rates, but it is significant at higher loading rates. The simulations using TM-XFEM-DD qualitatively capture the salient properties of high strain rate plastic deformation, such as the increased importance of thermal effects with increased strain rate. Higher temperature increase is observed in specimens deformed at higher strain rates. In addition, the predicted stress-strain response of the TM-XFEM-DD model is softer than that predicted by a purely mechanical DD model. This softening effect is found to be stronger in the case of the adiabatic heating versus fixed temperature change on the boundary of the domain. Overall, the development of these two models that incorporate electro- and thermomechanical coupling will allow for a more accurate and comprehensive analysis of plastic deformation at the mesoscale.