Can the "Strength of Connections" Account Explain Picture and Word Naming and Categorization Data? 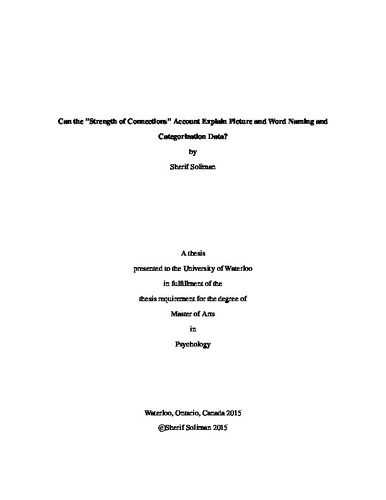 Potter and Faulconer (1975) reported that participants were faster to read words aloud than they were to name pictures, but were faster to categorize pictures than words. They took this as falsification of an account in which picture representations have to be translated to their verbal counterparts before semantic information about the object could be activated, and corroboration of an account that claimed that both picture and verbal representations have direct access to semantics. Their direct access account does sufficiently explain the findings, but there are other plausible accounts that could better explain the specific pattern they found. In the present work, I sought to explain their findings using an alternative account proposed by Besner et al. (2011), which posits that the strength of connections between localist modules vary as a function of use. Besner et al. (2011) found that participants were faster to perform parity judgments on Arabic numerals than on number words, but were equally fast at reading/naming aloud both, a finding that cannot be explained by the received view that frequency effects exist as resting levels of activation in localist modules, but can be explained by the strength of connections (SOC) account. The present experiments replicate Potter and Faulconer’s (1975) findings, and also replicate findings by Rogers and Monsell (1995) that show that switching from one task to the other incurs an RT cost. I derived and predicted that these switch costs would be larger in blocks in which the task instructions conflict with the task participants have learned to associate with a stimulus (default set), than in blocks in which task instructions are compatible with the default set. I find data in support of this prediction for words, but not for pictures. Possible reasons for the failure to find the predicted pattern for pictures are briefly discussed.