Together in Death: A Study of Late Bronze Age Double Burials in Mycenaean Chamber Tombs 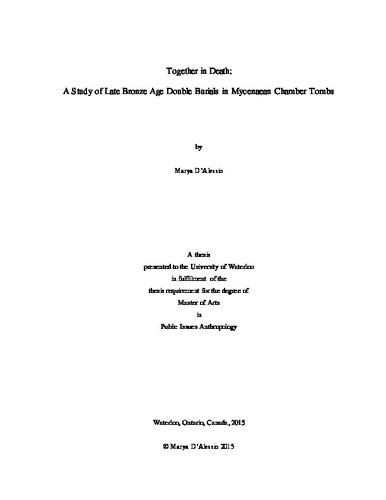 The Mycenaean civilization flourished during the late Bronze Age (ca. 1550-1050 BCE) throughout the Peloponnese in Greece and the Aegean. The Mycenaeans buried the dead together within communal chamber tombs, and therefore it is not unusual to discover multiple burials within chamber tombs. Multiple burials probably indicate a personal connection, whether it be familial or not, between individuals, as these individuals were specifically chosen by living members of their society to be buried in the same place. In analyzing these tombs, there is often an assumption that double burials were interred at the same time, and yet the evidence for simultaneous burial is rarely examined explicitly. This analysis is hampered by the fact that stratigraphic data and plans of tomb contents were frequently not reported in early excavations. Archaeologists often provide their own assumption as to whether double burials were interred simultaneously or not, with no data to substantiate such assumptions. This study presents a retrospective analysis of published data, including photographs, plans, and stratigraphy, where available, to examine whether double or multiple burials are likely to have occurred simultaneously within a tomb. By looking at the body positioning in situ, where drawings can illustrate a better image than text can describe, the relationship of the bodies to the stomion (doorway) of the tomb and the stratigraphy of the dromos (entranceway) of the tomb, it is possible to evaluate the evidence for sequential or simultaneous burials. This contributes to our knowledge of Mycenaean burial practices, and may have implications for the organization and structure of Mycenaean society.