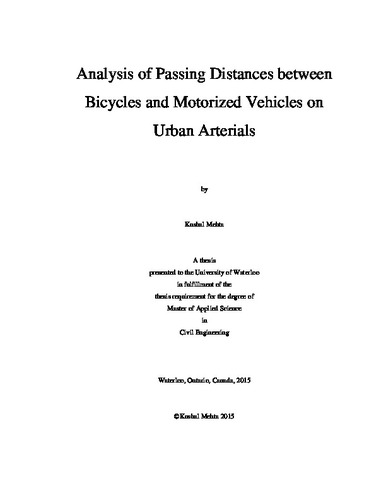 The absence of dedicated cycling infrastructure such as on-street bike lanes or physically separated bike routes forces cyclists to travel more frequently on urban arterials while sharing the road with motorized vehicles, and in turn, increasing the potential for vehicle-cyclist collisions. It is expected that the modal share of cycling will increase if cycling safety is improved; however, critical understanding is required about the relationship between vehicle-bicycle interactions, traffic conditions and their impact on cyclists’ safety. Several US states and Canadian Provinces have introduced, or (as is the case in Ontario) are considering, legislation requiring that motorists provide a minimum of one meter of lateral clearance when overtaking and passing a cyclist. These laws are often referred to as “safe passing” laws. However, there is currently very little evidence quantifying the proportion of overtaking maneuvers that are “unsafe” (i.e. a lateral clearance less than 1m). Furthermore, there is little evidence quantifying the influence that various factors (e.g. geometry, traffic, etc.) have on lateral clearances. And finally, though current design guidelines for selecting recommended geometric treatments for cyclists (e.g. shared lane; on-street bike lane; physically separated bike paths; etc.) are sensitive to roadway type, traffic volume, and posted speed limit, there is little consistency between guidelines from different jurisdictions and these guidelines do not appear to be based on objective measures of risk. The research described in this thesis seeks to improve the current understanding of vehicle-cyclist interactions; specifically the lateral clearances between motorized vehicle and cyclists during overtaking maneuvers on urban arterial roadways and to be able to quantify the influence that geometric and traffic-flow parameters have on these lateral clearances. A portable data acquisition system, capable of measuring and recording location, bike speed, and the lateral distance to vehicles overtaking the cyclist, was designed and built. This system was used to collect data for more than five thousand over taking maneuvers on two-lane and four-lane urban roads with and without on-street bike lanes within the Kitchener-Waterloo area in southern Ontario. These data revealed that 12% of passing maneuvers on two-lane arterials without bike lane were unsafe. For two lane arterials with a bike lane, only 0.2% of passing maneuvers were unsafe. For four lane arterials, 5.9% of passing maneuvers were unsafe when no bike lane was present and only 0.5% were unsafe when a bike lane was present. These results suggest that a significant proportion of passing maneuvers on arterials without bike lanes are unsafe. Further analysis showed that for four lane roadways without bike lanes, drivers may attempt to provide increased lateral passing distance by changing lanes or encroaching partially in the adjacent lane, however their opportunity to do may be restricted when vehicles are in the adjacent lane. A model was developed to estimate the probability of unsafe passing on 4-lane roads without bike lanes for specific traffic conditions. The model shows that the proportion of passing maneuvers that are unsafe increases as traffic demand increases, the distance between consecutive traffic signals becomes shorter, and traffic signal cycle lengths become longer. The model is able to estimate both the proportion of unsafe passings as well as the expected number of unsafe passings per bike trip per hour for a given arterial roadway. We compare these quantitative estimates to conventional cycling infrastructure design guidelines, including the Ontario Traffic Manual Book 18.