A neural model of the motor control system 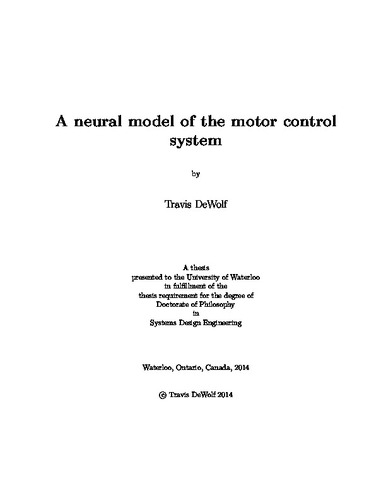 In this thesis I present the Recurrent Error-driven Adaptive Control Hierarchy (REACH); a large-scale spiking neuron model of the motor cortices and cerebellum of the motor control system. The REACH model consists of anatomically organized spiking neurons that control a nonlinear three-link arm to perform reaching and handwriting, while being able to adapt to unknown changes in arm dynamics and structure. I show that the REACH model accounts for data across 19 clinical and experimental studies of the motor control system. These data includes a mix of behavioural and neural spiking activity, across normal and damaged subjects performing adaptive and static tasks. The REACH model is a dynamical control system based on modern control theoretic methods, specifically operational space control, dynamic movement primitives, and nonlinear adaptive control. The model is implemented in spiking neurons using the Neural Engineering Framework (NEF). The model plans trajectories in end-effector space, and transforms these commands into joint torques that can be sent to the arm simulation. Adaptive components of the model are able to compensate for unknown kinematic or dynamic system parameters, such as arm segment length or mass. Using the NEF the adaptive components of the system can be seeded with approximations of the system kinematics and dynamics, allowing faster convergence to stability. Stability proofs for nonlinear adaptation methods implemented in distributed systems with scalar output are presented. By implementing the motor control model in spiking neurons, biological constraints such as neurotransmitter time-constants and anatomical connectivity can be imposed, allowing further comparison to experimental data for model validation. The REACH model is compared to clinical data from human patients as well as neural recording from monkeys performing reaching experiments. The REACH model represents a novel integration of control theoretic methods and neuroscientific constraints to specify a general, adaptive, biologically plausible motor control algorithm.