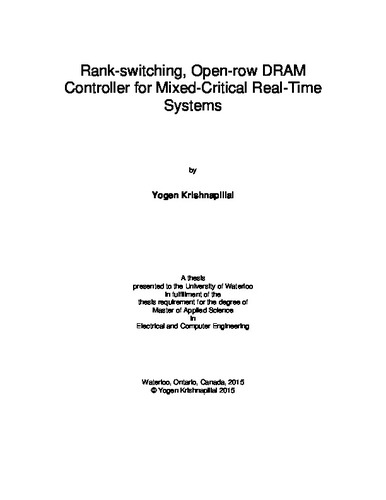 In this thesis, we present a rank-switching open-row DRAM controller for mixed critical real time systems. This memory controller is optimized for multi-requestor and multi-rank memory systems. The key to improved performance is an innovative rank-switching mechanism which hides the latency of write to read transitions in DRAM devices without requiring unpredictable request reordering. We further employ open-row policy to take advantage of the data caching mechanism (row buffering) in each device. We choose the bank privatization scheme where each requestor is assigned its own private bank or set of banks. This private bank mapping guarantees that each requestor has its own row buffers and cannot be interfered by other requestors. The proposed memory controller design allows maximum of thirty two requestors at a time targeting either two or four ranks. This controller provides complete timing isolation between critical and non-critical applications and allows for compositional timing analysis over number of requestors and memory ranks in the system. We designed both the front end logic for the command generation and back end logic for the DRAM timing constraint check and arbitration utilizing the rank switching techniques. The complete design is implemented and synthesized using Verilog RTL and finally, we evaluated performance using various benchmarks. Our proposed memory controller offers significantly lower worst case latency bounds for critical real-time applications and supports average throughput for non-critical real-time applications compared to existing real time memory controllers in the literature.