Estimation and Occurrence of Select Antimicrobials in the Grand River Watershed 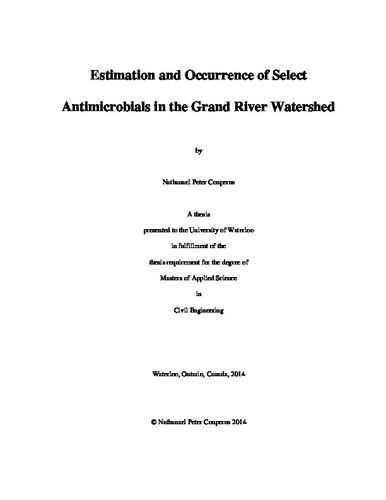 Antimicrobials are pharmaceutically active compounds that destroy or inhibit the growth of bacteria, fungi, protozoa, or viruses. This diverse group of compounds, used in both humans and livestock, are increasingly being detected in the environment, especially in soil and aquatic ecosystems. Their widespread environmental occurrence is being linked to the potential development of resistance traits in microorganisms, which is a serious threat to global health. Quantifying this health risk is difficult due to the lack of available data on the consumption of antimicrobials, as well as the varying regulations on their use and distribution. Further, the environmental fate and occurrence of these chemicals in watersheds is complex and poorly understood. The current research aims to address this knowledge gap by examining the occurrence and distribution of select antimicrobials in a watershed through modeling and empirical data collection (survey). It achieves this goal by addressing the following objectives: (1) to develop a mass load model for estimating the residual concentrations of veterinary antimicrobials; and (2) evaluate the occurrence and sources of select antimicrobials in surface waters. The Grand River Watershed, a mixed-use watershed in Southern Ontario, Canada, was selected as the study site. The mass load model was used to estimate the residual concentrations of four veterinary antimicrobials (lincomycin, monensin, oxytetracycline, and sulfamethazine) in the soil and water matrices. Predicted antimicrobial concentrations ranged from 0.1 μg/kg (monensin and oxytetracycline) to 60 μg/kg in soil (sulfamethazine) and 37 pg/L (oxytetracycline) to 18 μg/L (sulfamethazine) in surface water. Estimated antimicrobial concentrations were highest in sub-basins with high livestock densities, with the highest predicted levels found in the Nith sub-basin where there is intensive livestock production. For the occurrence survey in the Grand River Watershed, triplicate water samples were collected from 27 sites in the main channel, one location each in five tributaries, and seven wastewater treatment plant (WWTP) effluents. Temporal sampling was also performed in six additional sites (four in an agricultural tributary and two in the main channel). The water samples were analyzed for five antimicrobials (sulfamethazine, sulfamethoxazole, trimethoprim, lincomycin, and monensin), and three chemical indicators (venlafaxine, ibuprofen, and atrazine). In the main channel, measured concentrations of target analytes exhibited an increasing trend from the headwaters to downstream towards the discharge point to Lake Erie. Peak concentrations measured in the river water were 98 ± 8.8 ng/L for antimicrobials (sulfamethazine) and 146 ± 67 ng/L for the indicators (ibuprofen). In the effluents, the highest measured concentrations were 355 ± 126 ng/L for sulfamethoxazole and 349 ± 11 ng/L for ibuprofen. Atrazine was found at low concentrations throughout the river samples but was not found in the wastewater effluents. Lincomycin was found in only a few samples and monensin was not found in any samples. Based on an analysis of the measured analyte concentrations, non-point sources were likely the main source of sulfamethazine in the main channel, while wastewater discharges were the main sources of sulfamethoxazole and trimethoprim. Sulfamethazine was detected at lower concentrations (8.8-65 ng/L) during the temporal sampling than during the large-scale sampling (peak concentration of 98 ± 8.8 ng/L), suggesting the significance of timing when collecting field samples for monitoring purposes. Results from the model estimation suggest that livestock operations can be important sources of antimicrobials in receiving waters. Results of the survey sampling in the Grand River Watershed also suggest that agricultural sources and WWTP discharges are important sources of antimicrobials in the watershed. Over-all, none of the measured antimicrobial concentrations were above the 1 μg/L risk threshold (for water) recommended by the Committee for Medicinal Products for Veterinary Use (CVMP). As tighter regulations on the use of antimicrobials emerge in Canada, and as more WWTP upgrades are completed in the Grand River Watershed, the findings of the current study can serve as baseline for determining the future impacts of these regulatory and infrastructure changes.