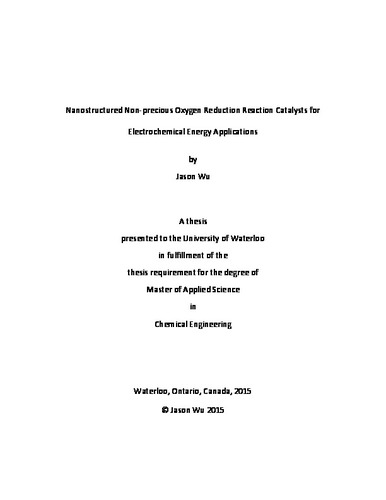 Fuel cell and state of the art battery technologies share a common electrochemical reaction in their operation. The oxygen reduction reaction (ORR) is a key phenomenon for the efficient operation for both electrochemical devices. However, ORR often suffers from slow kinetics and requires electrocatalysts to speed-up the reaction to practical levels. The use of platinum based catalysts has long been considered the most effective solution in improving ORR kinetics; however, platinum is an extremely expensive metal and is limited in world supply. It is critical to find alternative, non-precious catalysts to replace platinum catalysts. Heat treated non-precious catalysts produced through high temperature pyrolysis of temperatures over 600 °C are promising class of materials, showing high catalytic activity and stability in both acidic and alkaline conditions. However, heat treated non-precious catalysts do not match platinum based catalysts in terms of stability and activity. Furthermore, the active sites of heat treated non-precious catalysts are still under debate. . In the present work, non-precious carbon catalysts were synthesized via pyrolysis of carbon in the presence of nitrogen and a transition metal then evaluated and characterized. Iron is chosen as the transition metal for all of the experiments as it is naturally abundant, relatively safe, and displays the highest activity amongst transition metals in this application. In fact, iron displays the highest redox potential which has been noted to be related to the binding of dioxygen species. A number of different catalysts were synthesized then studied by varying the synthesis conditions and precursors employed to increase the activity of non-precious carbon catalysts. First, a new nitrogen rich ligand is synthesized to be used as the nitrogen source during pyrolysis. This ligand will chelate with iron in the system and thus will help prevent agglomeration of iron particles during pyrolysis, resulting in many isolated active sites. The ratios of iron to ligand were varied and the affects of varying the mass of iron in the system on catalytic activity was studied. Following this work, support-less catalysts focusing on employing one-dimensional nanofiber structures were synthesized using polyacrylonitrile as the basis of producing one-dimensional nanofibers. One-dimensional nanofibrous electrocatalysts were synthesized via electrospinning a solution of polyacrylonitrile in DMF. Iron was added into the solution as well to ensure the electrospun fibers were well impregnated with iron. The resulting nanofibers were then pyrolyzed and the catalysts were evaluated and characterized. The results that followed indicated that surface area and porosity of catalysts plays a significant role in obtaining highly active catalysts. Highly porous carbon catalysts were then synthesized, evaluated, and characterized as a result of this discovery. These catalysts were produced via electrospinning an emulsion of polyacrylonitrile and fumed silica particles. After pyrolysis, these particles were removed by treating the catalyst with HF acid. The results of the work completed have shown that it is possible to produce non-precious catalysts that can replace platinum, bringing us a step closer to full commercialization of renewable energy devices.