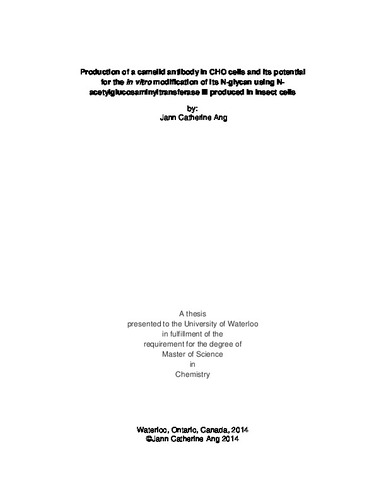 Monoclonal antibodies have been extensively used for clinical diagnosis over the years. Beyond their ability to bind antigens, their ability to invoke or evade immune responses has also led to their use in therapeutic applications. These additional characteristics have been linked to the sugar molecules naturally attached to the proteins through glycosylation – a post-translational modification performed in higher order organisms. Certain N-glycans, glycans attached to protein at asparagine residues, have been shown to influence antibody Fc-receptor mediated effector functions. Of these, glycans with a bisecting N-acetylglucosamine show promising characteristics. The goal of this project is to create a process to remodel a novel therapeutic mAb (EG2 camelid antibody against Epidermal Growth Factor Receptor (EGFR)) produced from Chinese Hamster Ovary (CHO) cell culture to have a larger fraction of proteins having bisecting N- acetylglucosamine. The driving hypothesis is that a robust in vitro process will be better than what can be achieved in vivo. To achieve this goal, expression and purification of truncated N- acetylglucosaminyltransferase III (GnT3) using the baculovirus expression vector system (BEVS) in the Sf9 insect cell line was used to gain an adequate supply of glycosyltransferase. The truncated form of GnT3 contained a C-terminal 6xHistidine-Tag and was cloned downstream of a honeybee mellitin (HBM) secretion signal. Activity of the GnT3 produced in insect cells was compared to a commercial GnT3 acting on our product of interest and on an IgG glycosylated protein. Active GnT3 was utilized to develop a scalable remodeling process to produce bisecting glycan enriched antibody pools.

Jann Catherine Ang (2015). Production of a camelid antibody in CHO cells and its potential for the in vitro modification of its N-glycan using N- acetylglucosaminyltransferase III produced in insect cells. UWSpace. http://hdl.handle.net/10012/9038