Developing Up and not Out: Understanding the Barriers to and Opportunities for Reurbanization along Waterloo’s Central Transit Corridor 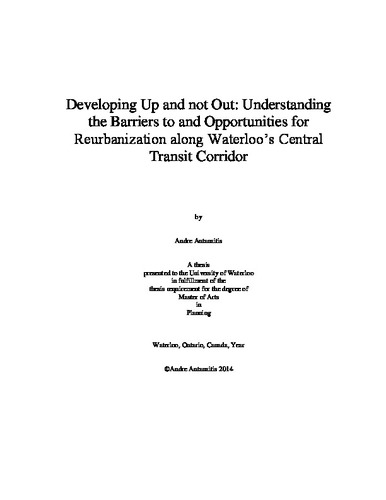 This thesis assesses factors affecting Region of Waterloo’s progress toward key reurbanization objectives mandated in the Growth Plan for the Greater Golden Horseshoe, 2006, and the Regional Official Plan, 2010. While concepts such as reurbanization and smart growth have been popularized as best practice planning, the implementation of smart growth ideals remains limited in many communities due to a myriad of barriers. To date, the Growth Plan, 2006, has been implemented unevenly across the Greater Golden Horseshoe (GGH) and planners are just beginning to understand the issues faced by local municipalities in their attempts to facilitate the Growth Plan’s reurbanization objectives. The Region of Waterloo has implemented many best practice growth management initiatives, and building permit data demonstrates a shift from ground-oriented, greenfield development patterns towards more compact, centralized development. As such, this study explores factors that have either facilitated or obstructed the intensification of under-utilized property in the Region of Waterloo through a qualitative case study that employs semi-structured interviews to capture the attitudes, opinions, and beliefs of planners, developers, and municipal politicians who have been actively engaged in the process of reurbanization. Research findings challenged our understanding of the Kitchener CMA as a prototype for urban dispersal. Progress towards key reurbanization objectives were attributed to cooperation and collaboration between planning and development agencies, financial incentives, progressive policy and regulation, the influence of Light Rail Transit, and labour market restructuring. However, the investigation also revealed that many of the easiest sites have already been redeveloped and what is leftover now are the complicated, challenging sites that were previously avoided by private developers. The most commonly cited impediments to redeveloping remaining properties include brownfield remediation, land acquisition and assembly, accommodating the automobile, market dynamics and consumer preferences, development regulation, and building/maintaining community support. This study confirms that infill and intensification involve greater risk and uncertainty compared with traditional greenfield developments, but demonstrates that many of these challenges can be dealt with through integrated planning strategies. To address development barriers and reinforce existing strategies, this thesis recommends forming strategic public-private partnerships, providing financial incentives geared to the development process, facilitating reduced parking standards, prioritizing urban form over land use in zoning regulations, and managing incremental growth to facilitate lot consolidation. Overall, this research demonstrates the opportunities for and constraints to reurbanization in a Canadian, mid-sized city context. More specifically, it advances our understanding about planners’ and developers’ experience implementing the reurbanization mandate in the Region of Waterloo.

Andre Antanaitis (2015). Developing Up and not Out: Understanding the Barriers to and Opportunities for Reurbanization along Waterloo’s Central Transit Corridor. UWSpace. http://hdl.handle.net/10012/9022