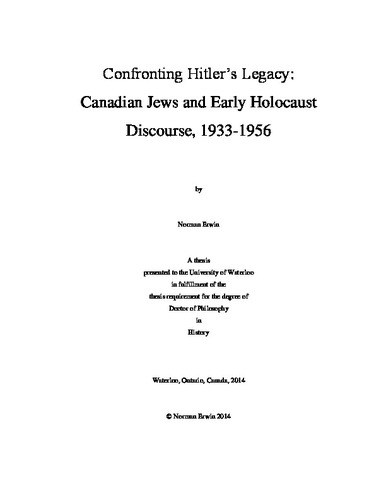 This dissertation examines Canadian Jewish thought from the Nazi period through to the immediate postwar era regarding the Nazis’ persecution and murder of European Jewry. It challenges the widely accepted position that Canadian Jews were indifferent to the Holocaust until the Six Day War of 1967, when survivors of Hitler’s extermination program pushed the Holocaust onto the Canadian Jewish community’s agenda in order to counter the threat of rising antisemitism. The evidence produced here demonstrates that Canadian Jews’ wartime experience of learning about the systematic slaughter of their brethren in Europe and of witnessing the democratic world’s unrelenting indifference to the plight of Jewish refugees ensured that the Holocaust was a central component of Jewish life in Canada in the immediate postwar era. Rather than the Cold War climate compelling Canadian Jews to suppress their memories of the Holocaust, as is commonly argued, this thesis shows that ongoing concerns over the security of Jews, the ineffectiveness of the UN, and the rise of antisemitism in Europe and the Middle East propelled Canadian Jews to raise the spectre of the Holocaust. They organized desperate campaigns to create international safeguards for minority groups and worked to strengthen Israel diplomatically and militarily in order to counter future threats of genocide from a position of strength. While the Holocaust remained a central feature of Jewish life throughout the 1940s and 1950s, Holocaust memory proved to be a divisive force amongst Canadian Jews since they often interpreted the Holocaust along ideological lines. The established liberal sector of the Canadian Jewish community bemoaned the ineffectualness of international law and adopted increasingly realist positions to counter the threat of Soviet and Arab antisemitism. The communist wing of the Canadian Jewish community was less inclined to trust liberal democracies to safeguard Jewish rights, especially during the German rearmament debate of the early 1950s. However, with growing evidence that showed that antisemitism was motivating the Soviet Union to collude with the Arabs to destroy Israel, most Canadian Jews became disenchanted by communism. Therefore, this dissertation alters the perception of the postwar Canadian Jewish community from one in which they were focused squarely on domestic issues, such as social mobility and fighting discrimination, to one in which memory of the Holocaust kept Canadian Jews focused on the tribulations facing Jews around the world.