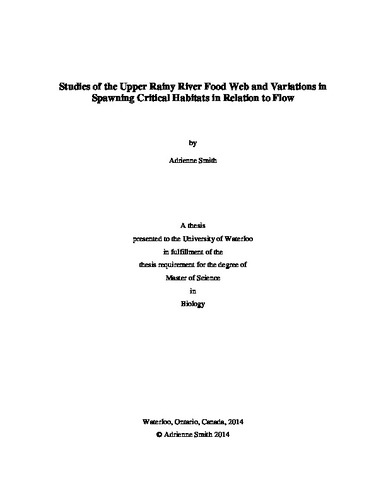 While the impacts of large hydroelectric dams are now well recognized, there is growing awareness of the pivotal role of the flow regime as a key driver of the ecology of rivers. Specifically, studies have identified low flow requirements for recruitment and spawning of fish species. Flow variation has also been shown to be a key structural influence on the food webs of regulated rivers. Overall, the alteration of flow regimes is considered one of the most serious and continuing threat to ecological integrity of rivers. In 2001, the International Joint Commission (IJC) issued an order prescribing a method for regulating the levels of the boundary waters of Rainy and Namakan lakes. The resulting hydrograph of the Rainy River is thought to have lost the natural seasonal flow pattern as a result of the upstream management practices. To date only limited biological monitoring has been conducted on Rainy River. Given the paucity of work on the Rainy River and importance of the flow regime for the ecology of lotic systems, the general purpose of the MSc research described here was to fill gaps in the available scientific knowledge, relating to population condition, food web and critical spawning habitat of the target species. Study findings included weight-length relationships (WLRs) for walleye (Sander vitreus), lake sturgeon (Acipenser fulvescens) and logperch (Percina caprodes), captured from April-June, 2012 and 2013. Weight models and condition indices for Rainy River target species were near the upper limits of values reported previously in the literature for the species. Growth models indicated no significant changes in growth patterns for walleye in comparison to the Rainy River/Lake of the Woods population in the late 1990s. In contrast, lake sturgeon population exhibited faster growth and condition than estimated for 2002 Rainy Lake populations. Application of stable isotope analysis provided us with the opportunity to explore the feasibility of using pectoral fin clips as an alternative to dorsal muscle tissue in feeding studies for adult lake sturgeon. The strong relationships between fin-clip and muscle tissue signatures demonstrated that fin-clips should be considered as good surrogates for muscle tissue. The result will allow trophic studies to accurately adjust for the effect of differential lipid accumulation between individuals and, for adult lake sturgeon, will effectively limit the need for lethal sampling to complete additional trophic studies. We applied the use of fin-clip tissue in stable isotope analysis to examine the dietary patterns of lake sturgeon inhabiting the upper reach of the Rainy River. In general the Rainy River supports a healthy food web with typical vertical trophic structure consisting of four trophic levels, with adult walleye sitting at the apex position. The study findings provide further evidence for lake sturgeon reliance on consumption of fish eggs or other substrate deposited fish material. The reliance on fish derived protein has been similarly reported in Lake Winnebago, Wisconsin (Stelzer et al., 2008), while historical studies report consumption of fish eggs (e.g. Cuerrier, 1966). Walleye and lake sturgeon spawning sites on the Rainy River were generally separated, with only a single location overlap. Both species showed preference for coarse substrates dominated by bedrock, bedrock with cobble/boulder, or cobble/boulder. The depths and velocities experienced by adults, eggs or larvae present at spawning grounds, however, varied significantly and encompassed reported values from previous studies. Although the proportions of preferred spawning habitats did not change significantly as water surface elevation (WSE) rose, the total availability of preferred spawning substrate types increased, more than doubling for both species. In addition to maintaining a constant WSE to prevent dewatering of spawning sites, or a reduction of water depths over selected lake sturgeon spawning sites as noted above, a minimum WSE of 328m must be maintained to optimize lake sturgeon spawning if the lower spawning habitat requirements and population numbers prevail. Walleye and lake sturgeon spawning does not appear to be limited within the Rainy River system (Mosindy and Rusak, 1991), although the quality and quantity of these areas is directly affected by fluctuations in river flow.