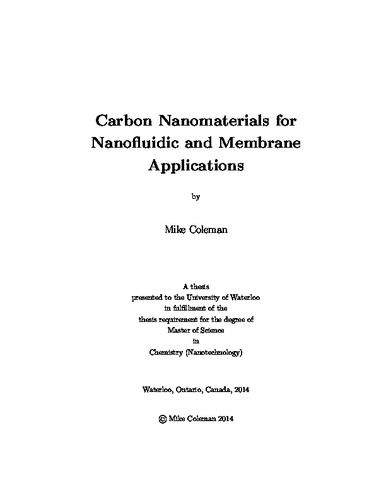 The successful fabrication and characterization of carbon nanomaterials as potential next generation materials for nanofluidic and membrane applications was demonstrated by this work. Ion transport through graphene oxide (GO) membranes of various thicknesses were investigated in order to determine the effect of steric interactions on ion selectivity. The diffusive transport rates of two charge equivalent ruthenium complex ions [Ru(bpy)3]^2+ and [Ru(phen)3]^2+, with a sub-angstrom size difference, were distinguishable through GO membranes and were used as a model to investigate pore and slit-dominant hindered diffusion. Analysis of experimental results suggested that ion transport is mostly facilitated by large pores (> 1.75 nm in diameter) in relatively thin GO membranes, while slits formed by GO stacking (< 1.42 nm in width) become dominant only in thick membranes. Furthermore, the interlayer spacing and overall pore structure of GO was engineered in order to optimize ion transport rates and create stimuli-sensitive membranes. This was completed by functionalizing GO with two different polymers; linear poly(ethylene) glycol (PEG-L), and poly (N-isopropylacrylamide) (PNIPAm). The addition of both PEG-L and PNIPAm polymers altered the nanofluidic channel geometry, significantly increasing the overall ion flux relative to pristine GO membranes. Analysis of the diffusive transport rates of [Ru(bpy)3]^2+ and [Ru(phen)3]^2+ through PEGylated GO membranes showed that the shorter PEG-L polymers tightened up and closed the larger pores, increasing the flux and selectivity while the longer polymers opened up the overall porous structure, increasing flux but not altering the observed selectivity. Ion permeation was recorded through PNIPAm-functionalized membranes for two different temperatures; T < Lower critical solution temperature (LCST) and T > LCST and observed transport rates were significantly higher than both PEGylated and pristine GO membranes. It was concluded that the grafted PNIPAm in the functionalized GO membranes does not undergo a structural change above the LCST and that enhanced ion transport rates at higher temperatures is the result of increased diffusion coefficients. The work presented herein expands the versatility of GO membranes for molecular sieving and separation applications. Furthermore, findings could give guidance to the rational design of GO membranes for high-precision ion selectivity and molecular sieving.