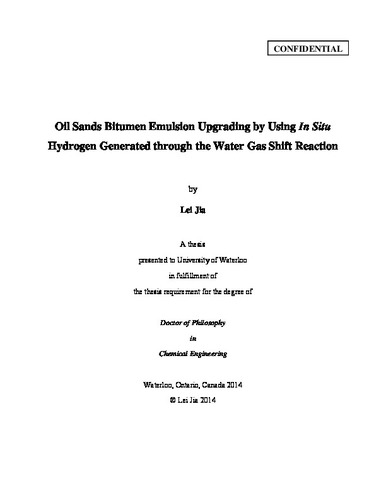 Canada has a large reserve of oil sands bitumen which is highly viscous and contains high percentages of asphaltenes and heteroatoms. Currently hot water extraction or steam injection is used in recovering the bitumen as emulsions, which then requires extensive demulsification and water/oil separations. The separated water cannot be reused or disposed of without further purification; while the dewatered bitumen needs to be blended with diluent to meet pipeline transportation specifications. Due to this burdensome production process, production of bitumen from Canadian oil sands is extremely vulnerable to the extremely high capital costs, increased diluent transportation costs, constrained pipeline capacity and stricter environmental regulations. A single-stage emulsion upgrading process was developed by Flora T.T. Ng and her research group, where the emulsified water was directly activated using the water gas shift reaction (WGSR) to provide in situ H2. Successful implementation of this novel process could reduce the water separation footprint, produce pipeline transportable oil without diluent and purify the emulsified water without massive water treatment before it could be used for hot water extraction or steam generation to recover the bitumen. Moreover, higher oil quality (like heteroatom removal, total acid number reduction, improved stability, etc.) would be obtained without building an expensive H2 plant. The key to the process is the use of in situ H2 and a nano unsupported MoS2 based catalyst, which has been proven during the early-stage studies. In order to further improve the technology readiness for this novel emulsion upgrading process, a series of studies have been performed on three aspects of this process: oil, water and catalysts. Previous research on this single stage bitumen upgrading process has focused on (a) the production and reactivity of in situ H2; (b) the hydrotreating performance and mechanisms, such as hydrodesulfurization (HDS), hydrodenitrogenation (HDN), hydrodearomatization (HDA), etc. The main focus of this thesis is on the conversion of asphaltene in Cold Lake bitumen emulsion upgrading and the water purification feasibility validation during Athabasca bitumen upgrading. In addition, the reaction conditions were also studied to pursue improved liquid yield and less hydrocarbon loss in order to maximize potential technology value with less capital and operational cost in future applications. During the investigation of this complex reaction system, process chemistry is discussed: like how the asphaltenes are converted, the effect of water, impact of catalysts. Water purification was first proven feasible via the emulsion upgrading process, where the majority of metals deposited in the solid residue, and more than 90% of the organic acids were found removed from the actual oil sands process affected water (OSPW). Although we have reported in early emulsion upgrading studies that metal ions were removed from the water associated with the bitumen emulsion, there has been so far no report on the removal of naphthenic acids. This organic acid removal from OSPW observed in this present study indicated the potential removal capability of the most unwanted toxicity source, naphthenic acids, through emulsion upgrading from both oil and water phases. This thesis provides a detailed study on the removal of model compounds for naphthenic acids, such as 2-naphthoic acid and substituted benzoic acid, etc. A preliminary naphthenic acids removal reaction mechanism is proposed, where hydrodeoxygenation (HDO) was found to be the main reaction pathway. Effects of reaction conditions, promoter addition and co-existing hydrotreating reactions are also discussed. The results show that the naphthenic acids removal occurred during the emulsion upgrading process conditions, and added considerable synergy to emulsion upgrading technology with water treatment and corrosion prevention. Nano unsupported catalysts involved in emulsion upgrading were also studied using advanced characterization methods. Effects of temperature, time, H2 source and promoter are discussed. Some morphology-activity correlations were observed, and the in situ H2 generated through the WGSR was found to produce shorter and less stacked MoS2 (002) crystalline structures than externally supplied molecular H2. It was also observed that the synergistic promotional behaviours of Co and Ni were not mainly dependent on the morphology changes; but instead, intrinsic activity changes probably played a more important role in Co and Ni promoted catalysts.