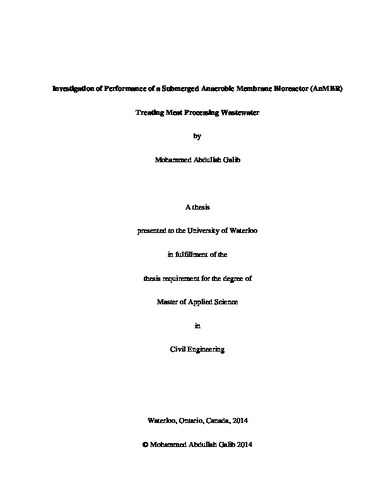 Anaerobic membrane bioreactor (AnMBR) has grown popular as a means of sustainable biological treatment in the recent few decades due to less energy and space requirement, less sludge production, increased treatability, and methane production, which can make the system energy-positive; however, membrane cost and membrane fouling remain the major issues in its widespread use. Slaughterhouse/meat processing wastewater poses threat to the environment and its release with a higher contaminant concentration than the discharge standards imposes surcharge fees on the plant. High organic strength and slowly degradable particulates in such wastewater make AnMBR a good choice for its treatment, as shown by few studies. However, those studies used membrane in a pressure-driven external configuration requiring high cross flow velocity and consuming more energy. Internally submerged vacuum driven membranes can operate on lower pressure and energy, while offering similar treatment potentials. Owing to the knowledge gaps, this study was conducted using an AnMBR in a submerged membrane configuration with the objectives to (a) assess the performance in terms of COD removal and biogas production at varying feed loads, (b) investigate the membrane performance in terms of achievable flux and fouling behaviour, and (c) establish baseline information on start-up and operating conditions for implementing larger scale reactors. A bench-scale anaerobic reactor (5L) was set up, with a submerged ultrafiltration hollow fibre membrane (pore dia. 0.04µm, surface area 0.046 m2). Sludge from a mesophilic anaerobic digester at a municipal wastewater treatment plant was used to inoculate the AnMBR, and wastewater from Conestoga Meat Packers, Woolwich, Ontario was used as the feed. The reactor was run on continuous mode at room temperature and neutral pH. The system performance was evaluated under three different operating conditions by varying the HRT (5d, 2d, and 1d), which simultaneously changed the membrane permeate flux. Intermittent pumping, surface scouring by biogas and weekly chemical cleaning were applied to minimize fouling of the membrane. The feed solids concentration was seen to fluctuate widely (0.3-2.6 g/L) depending on the nature and extent of works in the plant; however, the reactor showed good stability and the MLSS was not affected significantly by the wide variation. The average MLVSS concentrations were 1.7±0.7, 1.8±0.3, and 2.1±0.2 g/L, in Phases I, II, and III respectively with a variation of less than 550 mg/L. With the incoming organic concentration (TCOD 0.6-4.9 g/L) varying widely like the solids, the average effluent COD in Phase I, Phase II and Phase III were 96±28, 170±36 and 373±76 mg/L, giving very good COD removal efficiencies of 95±3.1%, 94±2.3% and 88±4.6%. The average organic loading rates (OLR) of 0.4±0.2, 1.4±0.4 and 3.1±1.1 kg COD/m3/day were achieved in the three Phases. Results of this study were similar to or better than some of the earlier studies with similar wastewater in terms of percent COD removals and effluent COD concentrations. The daily biogas production went up from 0.37±0.18 L/day in Phase I to 2.82±0.62 L/day in Phase III. The percentage of methane in the biogas remained consistently high at 72±4% throughout the study period. The specific methane yields were 0.24±0.16, 0.16±0.05 and 0.20±0.09 L CH4/g CODremoved in Phase I, II and III respectively, which are similar or slightly lower than the values (0.2 – 0.3 L CH4/g CODremoved) reported by some of the earlier studies. VFAs/Alkalinity ratio of less than 0.2 was observed throughout the study which indicated the stability of the system. Extracellular polymeric substances (EPS) in the reactor sludge were 96.9±8.6, 100.2±8.5 and 105.2±5.0 mg/gVSS in Phases I, II and III, with a Protein/Carbohydrate ratio of 6.1-6.5. The increasing EPS concentrations contributed towards build-up of cake sludge on the membrane surface, which augmented membrane fouling. Average measured membrane flux of 1.14±0.02, 3.15±0.04 and 6.15±0.37 LMH were observed during the three Phases. Measured flux were very close to the set flux throughout Phases I and II, and the first 15 days of Phase III, indicating that there was none or insignificant membrane fouling. This attested the success of membrane surface scouring with biogas and periodic membrane maintenance cleaning. However, with the progress of Phase III (at 1d HRT) the membrane became more fouled and declines in flux were experienced. Transmembrane pressure (TMP) at the end of Phase I, Phase II and at the beginning of Phase III were below 3 kPa. However, TMP higher than 40 kPa was observed towards the end of Phase III. This lab-scale AnMBR was able to demonstrate the applicability and efficiency in treating meat processing wastewater with a submerged membrane and at ambient temperature. The produced biogas had high percentage of methane, suggesting its scope for being an energy positive process, though there is still potential to increase the specific methane production. From the results of this study, HRT of 2 days, SRT of 50-60 days and membrane permeate flux of 6 LMH are recommended. Periodic maintenance cleaning will help to reduce membrane fouling. The start-up and operational information from the successful performance of this lab-scale reactor can be used as baseline for implementation of a larger or pilot scale AnMBR treating similar wastewater.