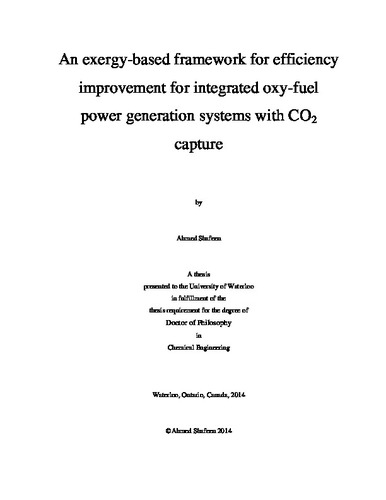 The global energy and electricity demand is increasing rapidly along with the consumption of fossil fuels, more specifically coal and natural gas. This results in accelerated growth of anthropogenic emissions of greenhouse gases (GHG), in particular CO2, into the atmosphere which is assumed to be the main cause of global warming. In order to mitigate CO2 emissions while sustaining the growth in power generation, it is necessary to develop advanced energy efficient technologies for power generation. Power generation systems based on fossil fuel combustion technologies will maintain their dominant position in the global energy infrastructure for decades to come. However, in order to sustain power generation in a carbon constraint environment, the fossil fuel based combustion systems need to be more energy efficient and emit significantly less pollutants (in particular CO2) to the atmosphere. Oxy-fuel power generation technology is a promising and novel technology pathway for power generation which provides high efficiency and near zero emission opportunities with CO2 capture. The Oxy-fuel combustion has been widely used in steel and glass industries for many decades; however its potential use in power generation is relatively new. Hence, extensive research and development (R&D) as well as process simulation and modeling work are required to develop and validate the technology. The CO2 capture processes are inherently energy intensive and associated with high capital investment and increased operating cost, along with significant efficiency loss. Efficiency loss in any industrial process including power plants is also due to the waste heat from different unit operations. However, in order to reduce waste heat and improve efficiency, these plants require better heat integration, the first step of which is to identify point sources for heat loss and calculate the available amount of heat that can be utilized. This can be done by performing an exergy analysis on the overall plant and incorporate the efficiency improvement measures based on the exergy analysis results. In order to make tangible improvement in efficiency and emission control, existing fossil fuel power plants and, even more so, new plants based on the next generation technologies that are yet to be implemented, require extensive process modeling to validate and optimize the design concepts before their implementation. These efforts will make the technology more competitive or to comply with environmental regulations in support of Carbon Capture and Storage (CCS), which is considered to be a key transitional technology solution to the issue of climate change and continuous utilization of fossil fuel resources in the next few decades. Using a systematic exergy-based approach, the present study aims at developping an efficient integrated oxy-fuel power generation system process model with air separation and CO2 capture and compression modules. The integrated model was developed in HYSYS process simulation software package. The overall model consists of four major modules/subsections, namely, 1) oxy-fuel boiler & combustion loop, 2) balance of plant (BOP), 3) air separation unit (ASU), and 4) CO2 capture and compression unit (CO2CCU) also known as CanCO2 (a patented process). The single reheat BOP steam cycle condition is 242 bar/593oC/622oC Rankine cycle, where the main steam and reheat steam are at 593oC and 622oC, respectively. Each subsection is modeled in detail to work as an independent model in separate flow sheets and then combined together in a main flow sheet to generate the integrated model. This model is a fuel agnostic model and a typical lignite coal was used for this study. Detailed exergy analysis for various process streams were carried out as an exergy analysis tool was implemented in the model to automate the exergy analysis calculation with an exergy reference condition at 25oC and 1 atmosphere. This automated exergy analysis tool allows generating data at various process conditions with single change of a process parameter in the overall model. Accordingly exergy efficiency improvement potentials were identified for different unit operations. This identification allowed incorporating process improvement measures which ultimately increased the overall efficiency of the plant. A sequential approach was undertaken for this model improvement. The final outcome of this exercise was an improved integrated oxy-fuel model with higher net power efficiency. The model was developed for a 786 MWgross power plant (521.25 MW net in the base model) integrated with CO2 capture and air separation unit (ASU). The O2 generated from the ASU has a purity of ~95% (% mol). The performance result, based on exergy analysis, indicates an efficiency improvement of approximately 0.6 percentage point based on high heating value (HHV) and a net power gain of approximately 2.14% compared to a base model. In specific cases, the gain in HHV efficiency and net power can increase up to 1.15 percentage point and 4.12%, respectively. The captured CO2 has a purity and recovery rate of 95.78% (% mol) and 92.55%, respectively, at pipeline transport conditions (110 bar, 43oC). This unique model is a first step to develop an integrated high efficiency oxy-fuel plant with CO2 capture, which is considered to be a sustainable technology for future deployment for near-zero emission power generation plants. This model is unique in nature in the context that it provides a flexible platform to develop simultaneously a process model of an integrated oxy-fuel power plant and perform exergy analysis for the same model where the power generation capacity of the model could be of any range as defined by the user (> 0 MW ~ no upper limit in MW number). The major process parameters also can be manipulated relatively easily by changing them in a single location and the ripple effect of which recalculates and builds a new overall model automatically (including exergy calculations). This research work establishes a unique approach to improve the performance of integrated oxy-fuel power generation systems. It can be extended by including cost analysis tool and generate techno-economic data. Moreover, similar to exergy analysis tool, a detailed optimization analysis can also be implemented in the overall model which could be a separate study of its own. However, this current analysis will be very useful for technology demonstration and commercialization of the oxy-fuel technology in power generation application and reduce CO2 emission to the atmosphere from these plants.