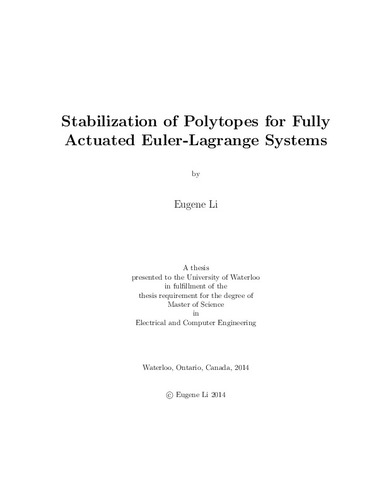 Given an Euler-Lagrange system and a convex polytope in its output space, we design a switched feedback controller that drives the output to the polytope. On the polytope, the system output tracks assigned trajectories or follows assigned paths. The study of this problem is motivated by industrial applications such as robotic painting, welding and three dimensional printing. Many engineering systems, such as robotic manipulators, can be modelled with Euler-Lagrange equations, and many engineered surfaces, designed using software, are naturally modelled as convex polytopes. We use feedback linearization to decompose the design problem into two subproblems; stabilizing the polytope surface, and controlling its motion along the surface. The first subproblem, known as the design of the transversal controller, leverages the fact that a polytope can be represented as a finite union of facets. The controller determines the closest facet to the system output and stabilizes that facet by stabilizing its corresponding hyperplane via feedback linearization. The transversal dynamics can be stabilized using linear controllers. At the boundary of a facet, we propose a switching law that ensures weak invariance of the polytope for the closed-loop system. The second subproblem, known as the design of the tangential controller, enforces desired dynamics while the system output is restricted to the polytope. We investigate control specifications such as following a predefined path on the surface and tracking a trajectory that moves along the surface. The separation of the transversal and tangential control design phases is possible because feedback linearization decouples the transversal and tangential dynamic subsystems. This approach to control design is demonstrated experimentally on a four degree-of freedom robotic manipulator. The experimental implementation is made robust to modelling uncertainty via Lyapunov re-design methods.