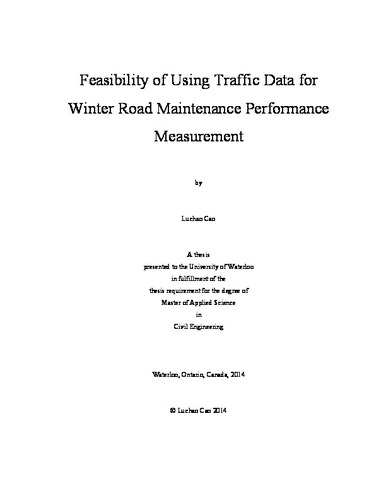 Winter road maintenance (WRM) operations, such as plowing, salting and sanding, are significant to maintain both safety and mobility of highways, especially in countries like Canada. Traditionally, WRM performance is measured using bare pavement regain time and snow depth/coverage, which are reported by maintenance or quality assurance personnel based on periodic visual inspection during and after snow events. However, the increasing costs associated with WRM and the lack of objectivity and repeatability of traditional performance monitoring methods have stimulated significant interest in developing alternative performance measures. This research is motivated by the need to develop an outcome based WRM performance measurement system with a specific focus on investigating the feasibility of inferring WRM performance from traffic state. The research studies the impact of winter weather and road surface conditions (RSC) on the average traffic speed of rural highways with the intention of examining the feasibility of using traffic speed from traffic sensors as an indicator of WRM performance. Detailed data on weather, RSC, and traffic over three winter seasons from 2008 to 2011 on rural highway sites in Iowa, US is used for this investigation. Three modeling techniques are applied and compared for modeling the relationship between traffic speed and various road weather and surface condition factors, including multivariate linear regression, artificial neural network (ANN), and time series analysis. Multivariate linear regression models are compared by temporal aggregation (15 minutes vs. 60 minutes), types of highways (two-lane vs. four-lane), and model types (separated vs. combined). The research also examines the feasibility of estimating/classifying RSC based on traffic speed and winter weather factors using multi-layer logistic regression classification trees. The modeling results have shown the expected effects of weather variables including precipitation, temperature and wind speed, and verified the statistically strong relationship between traffic speed and RSC. The findings suggest that speed could potentially be used as an indicator of bare pavement conditions and thus the performance of WRM operations. It is also confirmed that the time series model could be a valuable tool for predicting real-time traffic conditions based on weather forecast and planned maintenance operations, and the multi-layer logistic regression classification tree model could be applied for estimating RSC on highways based on average traffic speed and weather conditions.