The Role of Institutions on R&D, FDI, and Economic Growth 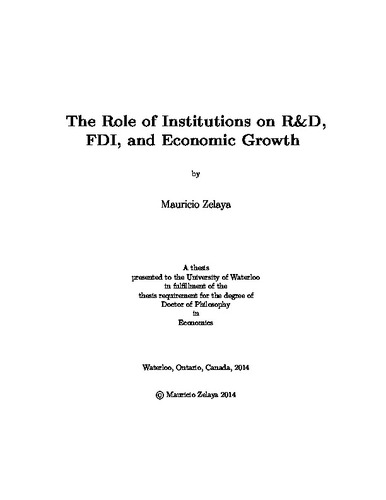 This thesis broadly consists of three essays examining the impact of institutions on firm R&D, Foreign Direct Investment (FDI) activity, and economic growth. The focus of each paper is unique in its contribution. The first chapter examines the evolving role of domestic Intellectual Property Rights (IPR) in the context of increasing globalization, where the R&D incentives of firms are framed not only by the IPR regime in their home country, but also by the IPR in its export markets. This paper first reviews the literature related to the classical relationship between IPR and innovation. Contributing to the growing literature, this paper exploits the exogenous variation in partner IPR as a mechanism to interpret the causal impact of IPR on private sector R&D investments. By merging datasets on R&D, production, trade, and IPR to construct an export-weighted index of trade partner IPR by country-industry-year, this paper explores whether firms respond to trade partner IPR. After including numerous controls as well as industry, year, and country fixed effects, the results of this essay suggest a positive relationship between domestic IPR and private sector R&D. Similarly, the results also suggest that there is a positive and significant relationship between export partner IPR and domestic R&D activity. These results are further confirmed when constructing a firm-level export-weighted index of trade partner IPR from a unique Canadian firm-level export dataset. The results not only suggest a causal link between IPR and firm R&D, they also highlight the need to consider domestic IPR policy as but one piece of the IPR regime that firms face. The second chapter assesses the impact of democratization on corresponding economic growth. It is important as it is undeniable that political institutions, the quality of bureaucracy, mode of governance and an efficient rule of law should have a direct effect on per capita income and economic growth. The essay first reviews the academic literature related to democracy and economic growth, while discussing the characteristics associated with both democratic and non-democratic regimes. The analysis begins by employing an annual panel data consisting of 43 developing economies in Africa, Latin America, and Asia between 1970 and 1999. The results in this essay suggest that countries moving towards democracy experience lower levels of economic growth. These findings are robust across OLS, fixed effects, and IV estimates. More importantly, a more thorough analysis indicates that an over investment in public goods from democratic regimes may be driving these results. Furthermore, this research is the first to offer empirical evidence on the magnitude of differential effects that the type of governance has - whether a democracy or dictatorship - on country specific economic growth. Lastly, the final chapter examines the locational choices of multinational firms in the presence of political risk. Following a real options approach, the results suggest that the vertical integration strategy of firms divest from institutional uncertainty, while government officials combat domestic country risk by providing overly generous incentive packages to attract foreign investors. Furthermore, through a numerical example, our results suggest that tax credits may be a more suitable method to attract FDI, as FDI not only tends to respond more to changes in tax credits than investment subsidies, but it is also significantly less costly for the host government to implement.