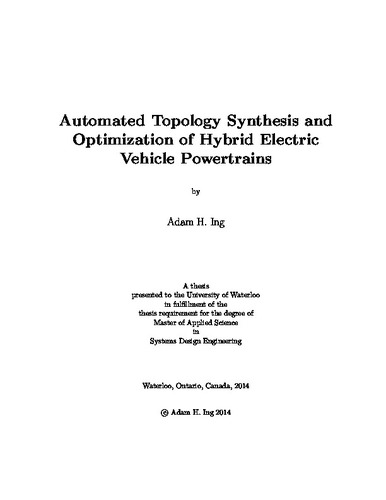 This thesis presents a framework to automate the process of designing Hybrid Electric Vehicle (HEV) powertrain architectures. An algorithm was developed to assemble and compare all possible configurations of powertrain components. Combinatorics was used to discover all possible combinations of: an internal combustion engine, high-torque low-speed electric motor, low-torque high-speed electric motor, planetary gearset, and five-speed discrete gearbox. The Graph Theoretic Method was used to generate the powertrain models. The powertrain models were comprised of steady-state equations in symbolic form. An optimal control strategy is required to fairly compare the different topologies because a powertrain control strategy is dependant on the configuration. Dynamic Programming was used to determine the control law that minimizes the energy consumption for a given drivecycle. Evaluating every possible topology would take an extremely long time, so topologies were evaluated using a multi-stage screening process. The first stage examined the structure of the powertrain and used heuristics to eliminate infeasible topologies; 512 topologies were feasible. The second stage eliminated topologies that could not meet basic driving performance; 193 topologies were feasible. Basic driving performance was tested using a section of the US06 drivecycle. The sizes of three components were optimized to ensure the topology is feasible independent of the size of the components. The third stage eliminated topologies which could not achieve driving performance design goals; 159 could achieve the performance requirements, but only 119 were reasonably fuel efficient. The driving performance goals were implemented with a drivecycle based on the Partnership for a New Generation of Vehicles (PNGV) goals. The sizes for five components were optimized at this stage. The 20 most fuel efficient powertrains were selected for further evaluation. Additionally, 4 common powertrains were evaluated for reference. The size of the components were optimized for a combination of the PNGV drivecycle and the HWFET drivecycle. The most fuel efficient topology was found to be a Powersplit hybrid which has a discrete gearbox between the final drive and the powersplit device. The electric motor, planetary carrier gear, and gearbox were connected in parallel. It was found that Parallel-like, Powersplit-like, and Complex-like topologies were were the most efficient powertrain configurations. Powertrains containing two gearboxes were more efficient because the geartrain models ignored mechanical inefficiencies.