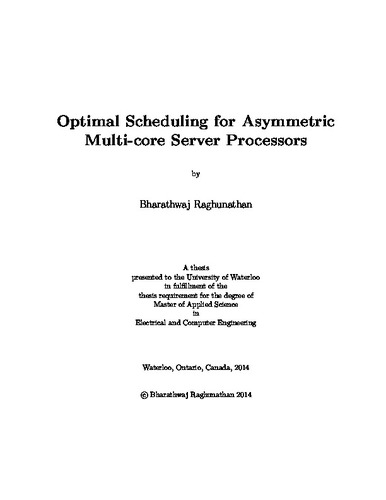 The arrival rate of jobs at servers in a data-center can vary significantly over time. The servers in data-centers are typically multi-core processors, which allow jobs to be processed at different degrees of parallelism (DoPs), i.e., the number of threads spawned by a job. In this thesis, we show analytically as well as empirically that the DoP which minimizes the service time of jobs varies with the arrival rate of jobs. Also, recent trends have shown a move towards asymmetric multi-core server processors. These processors are made up of multiple clusters, each consisting of cores of different type and of which only one cluster can be turned on at a given point in time while the others remain “dark”. We show that the choice of the optimal cluster is dependent on the arrival rate. Based on these observations, we propose a run-time scheduler that determines the optimal DoP and performs inter- cluster migration to minimize the mean total service time. The main contributions of this thesis are • We propose a queueing theoretic model to determine the mean service time of jobs as function of the DoP, number of parallel jobs and the cluster choice. • Based on the queueing theoretic model, we show that both the optimal DoP and cluster choice are dependent on the job arrival rate, and propose a run-time scheduler that makes optimal optimal cluster migration and DoP selection decisions to minimize mean service time.