Postadolescent Novels in Contemporary German and Canadian Literature: Defining Features and Character Development of In Plüschgewittern’s and The Flying Troutmans’ Protagonists 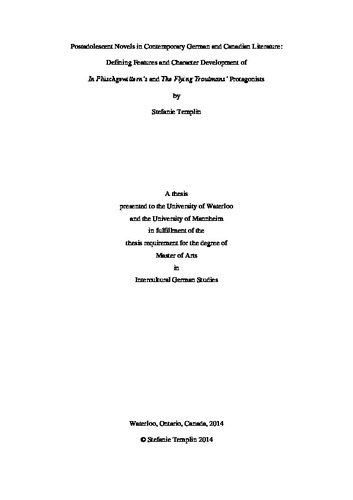 Postadolescence is a relatively new sociological and psychological phenomenon. While previous research has primarily read the postadolescent novel as an adolescent novel, this thesis seeks to contribute to existing scholarship by broadening the scope of analysis; it will remove the postadolescent novel from its limited confinement within the genre of adolescent fiction and examine it from the lens of the novel of formation instead. This is not to say, however, that the postadolescent novel should be read as a Bildungsroman; this term merely serves as a tool for interpreting novels of postadolescence with emphasis on their protagonists’ crucial life stages. This thesis also considers postmodernism as a key concept to the emergence of postadolescence and proposes that there is indeed a critical need for a perspective that examines cultural and literary studies as well as sociological and psychological approaches in order to more fully comprehend this term. Sociological postadolescents have largely completed the development of their social, emotional, intellectual and physical faculties, but refuse or are unable to integrate themselves into society’s institutional structure. Therefore, they are not, as sometimes suggested, legal adults who behave and live like adolescents. A narrow focus on such psychological and sociological developmental traits can be widened through an analysis of the specific characteristics that postadolescents display in fictional works, such as postmaterial values, a high regard for self-actualization, and the lasting possibility of personal development as well as a change of direction of that development. This thesis thus applies postadolescent theory to fiction in order to identify postadolescent protagonists, distinguish them from adolescent characters, and situate them in relation to their personal development throughout the novel. Miriam Toews’ novel The Flying Troutmans and Wolfgang Herrndorf’s In Plüschgewittern will serve as examples for texts centered on the life stage of postadolescence.