Globality and Locality in the Discourse of Advertising: the Use and Function of Language Variation in TV Commercials 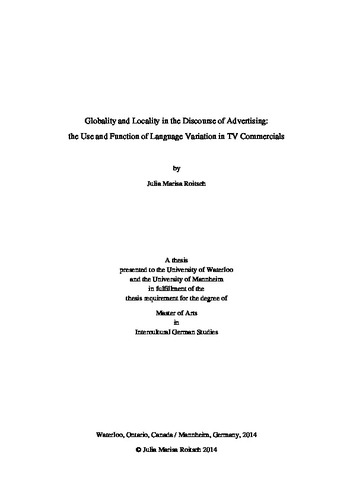 The main interest of this thesis lies in the analysis of television advertising with respect to language varieties, in this case regional dialects as well as foreign accents. With advertising being understood as a form of (public) communication, this thesis is part of sociolinguistics and contributes to the already existing research on advertising, which largely focuses on linguistic elements only. We encounter advertising everywhere in our daily lives, but very often do not perceive it consciously. The process of globalization has certainly led to a greater mobility on the part of the individual and a standardization of communication strategies, but it has also brought about a greater desire for localization, i.e. for the purpose of identity construction, which can be expressed through language use. Spaces or places and an individual’s language are closely intertwined. The first part of this thesis addresses the theoretical framework and methodological approach; the second part comprises the analyses of the individual advertisements. The approach to analyze the advertisement texts is a discourse-analytic one and encompasses the different levels of each text as well as the frames it is embedded in. I also take into consideration the text-image relation. This thesis covers two major questions: Why are regional dialects and foreign accents used in television advertising and how does the power of images support or counteract the associations with the language variety in question? I argue that the use of different language varieties calls attention to language contact phenomena—phenomena promoted by globalization processes—and social de-/reterritorialization (Jaquemet, 2005). Despite giving the appearance of authenticity, and with the clear intention to reduce the complexity of the advertisement story, all advertisements make use of stereotypes (e.g. regarding geographic regions, ethnic groups or language). My thesis shows how society and advertising mutually influence each other.

Julia Marisa Roitsch (2014). Globality and Locality in the Discourse of Advertising: the Use and Function of Language Variation in TV Commercials. UWSpace. http://hdl.handle.net/10012/8772