The Mind of Modernity: Canadian Bilateral Foreign Assistance to India, 1950-60 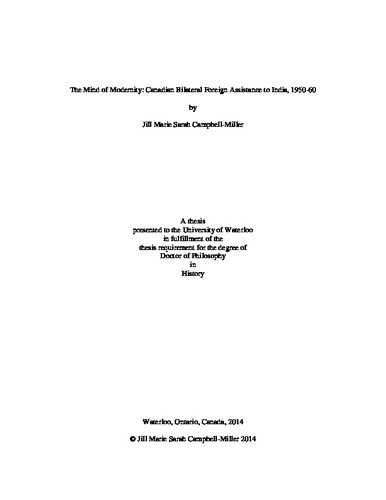 This dissertation examines the history of Canada’s early bilateral foreign assistance program to India between 1950 and 1960. With Canada’s decision to join the Colombo Plan for Co-operative Economic Development in South and Southeast Asia in 1950, India became the largest beneficiary of Canadian aid for the next decade. This dissertation argues that the ideology of high modernism permeated conventional thinking among elites in the Canadian and Indian governments, convincing officials in both countries of the rightness of modernization and industrialization. Canada’s support for the Commonwealth and particularly the United Kingdom, and the context of a new Cold War, provided its initial motivations to join the Plan. Although the first year of the program challenged officials, Canada settled into an aid relationship with India that tried to find, in the words of Colombo Plan administrator R.G. Nik Cavell, a “distinctively Canadian” approach that matched Canadian goods and expertise with the developmental needs of India. This approach contrasted with that of Escott Reid, high commissioner in India between 1952 and 1957, who advocated a developmental framework which focused on India’s economic needs over Canadian domestic priorities. Although Reid never made the impact on the aid program that he desired during his time in the country, he succeeded in emphasizing its importance to officials in Ottawa. Significant changes followed the election of the Progressive Conservative government in 1957, including a greater commitment to multilateralism as exemplified by the decision to join the World Bank’s Aid-India Consortium, and the reorganization of various disparate aid programs into the External Aid Office under the direct control of the Department of External Affairs. Diefenbaker did not succeed in his larger attempt to make the Colombo Plan a wheat surplus disposal program, and Cavell’s vision for the “distinctively Canadian” program began to fade by the end of the decade.