An Inventory Routing Problem with Cross-Docking 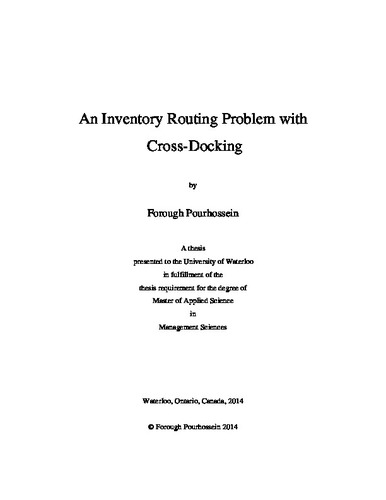 This thesis concerns inventory-transportation tradeoffs in which a number of suppliers serve multiple customers, each ordering several product types. The goal is to design optimal routes to satisfy the customers’ demands. In the proposed approach, the products are shipped to cross-docks from the suppliers, and several customers will be served by each route beginning at a cross-dock. The objective is to minimize the total cost, beginning with summing the transportation costs on those edges through which trips may go, times the shipment frequencies. The holding costs at customers, and the pipeline inventory costs on the routes, take into account that various products may have different carrying-cost parameters. Based on some analytical results, the developed model is reformulated in terms of a single set of decision variables. The holding cost makes the objective function highly nonlinear. In addition, transportation cost and pipeline inventory cost are quadratic. After linearization of the objective function, a column generation algorithm is proposed to solve the nonlinear mixed-integer programming model. The holding cost, which is the sum of a set of fractions, is linearized after objective-function decomposition. Each of the decomposed sub-problems has only one fraction, which can be linearized by replacing that fraction by a new decision variable and adding some constraints to the formulation. To linearize the quadratic parts of the objective function, we substitute a new variable for the multiplication of each pair of decision variables, and add some new constraints. We provide computational results for the model with a single product. All parameters are generated randomly. Our proposed algorithm can optimally solve some problems with up to 626 edges. However, CPU time might be very high. For instances with 500 edges, CPU time can be up to 20 hours depending on the number of iterations the algorithm needs to find the optimal solution. Instances with up to 300 edges are solved to optimality within a CPU time of only one hour on a computer with 16 GB RAM and 3.40 GHz CPU.