Toward a Model of Boredom: Investigating the Psychophysiological, Cognitive, and Neural Correlates of Boredom 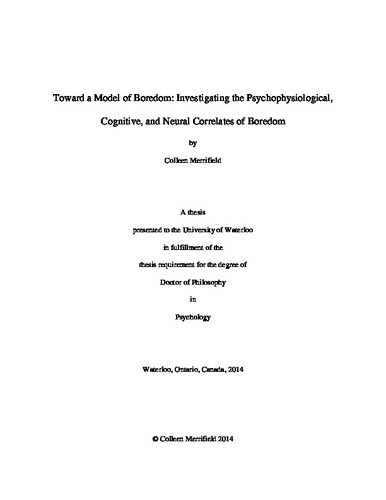 Boredom is a universal human experience that has the potential to impact a broad range of activities, especially when experienced at chronic and/or elevated levels. Despite this, research is only beginning to gain a better understanding of the construct itself. This thesis set out to examine three aspects of boredom. First, the psychophysiology of state boredom was explored to better understand whether it differs from that of sadness, a similarly valenced state (used as a proxy for depression) and to determine whether boredom is associated with increased or decreased physiological arousal. Next, state and trait boredom were examined with respect to different attentional tasks to determine whether boredom interacts with these types of attention in distinct ways. Finally, the neural underpinnings of state boredom were explored, using resting state fMRI and spatial independent components analyses. Broadly speaking, results of Experiment 1 suggested that the patterns psychophysiological responses associated with state boredom are distinguishable from sadness and that boredom is associated with increased arousal and decreased attention. In Experiment 2, trait boredom was associated with faster reaction times on a cued attention task and higher error rates on a sustained attention task, suggesting that highly boredom prone individuals may be better able to disengage their attention from transient stimuli but worse at self-sustaining attention over time. Finally, in Experiment 3, robust activation of the default network (DN) was seen during a classic resting state scan, as well as during two boring tasks (i.e., watching a boring video and completing a sustained attention task). In addition, activity in the insular cortex was anticorrelated with activity in the DN during the two boring tasks, suggesting that boredom may interfere with switching between the DN and task-positive networks when attention is required to be directed externally. Taken together, results of this thesis offer new insights into the physiological, behavioural, and neural processes that characterize the experience of boredom. Results are discussed in terms of current models of boredom.

Colleen Merrifield (2014). Toward a Model of Boredom: Investigating the Psychophysiological, Cognitive, and Neural Correlates of Boredom. UWSpace. http://hdl.handle.net/10012/8671