Data Flow Analysis in the Presence of Correlated Calls 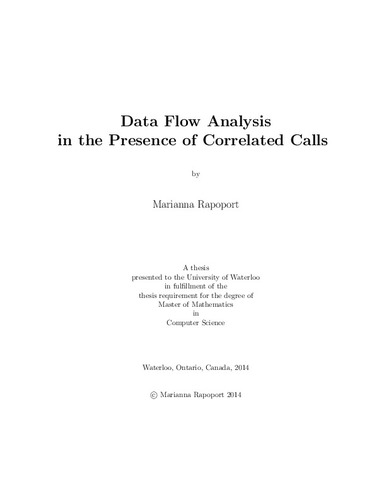 This thesis presents a technique to improve the precision of data-flow analyses on object-oriented programs in the presence of correlated calls. We say that two method calls are correlated if they are polymorphic (have multiple targets) and are invoked on the same object. Correlated calls are problematic because they can make existing data-flow analyses consider certain infeasible data-flow paths as valid. This leads to loss in precision of the analysis solution. We show how infeasible paths can be eliminated for Inter-procedural Finite Distributive Subset (IFDS) problems, a large class of data-flow analysis problems. We show how the precision of IFDS problems can be improved in the presence of correlated calls, by using the Inter-procedural Distributive Environment (IDE) algorithm to eliminate infeasible paths. Using IDE, we eliminate the infeasible paths and obtain a more precise result for the original IFDS problem. Our analysis is implemented in Scala, using the WALA framework for static program analysis on Java bytecode.