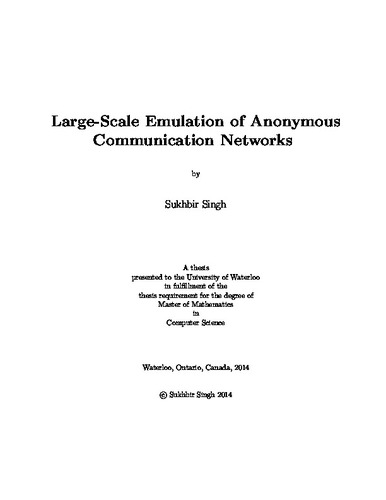 Tor is the most popular low-latency anonymous communication system for the Internet, helping people to protect their privacy online and circumvent Internet censorship. Its low- latency anonymity and distributed design present a variety of open research questions related to — but not limited to — anonymity, performance, and scalability, that have generated considerable interest in the research community. Testing changes to the design of the protocol or studying attacks against it in the live network is undesirable as doing so can invade the privacy of users and even put them in harm’s way. Traditional Tor research has been limited to emulating a few hundred nodes with the ModelNet network emulator, or, simulating thousands of nodes with the Shadow discrete-event simulator, both of which may not accurately represent the real-world Tor network. We present SNEAC (Scalable Network Emulator for Anonymous Communication; pronounced "sneak"), a large-scale network emulator that allows us to emulate a network with thousands of nodes. Our hope is that with such large-scale experimentation, we can more closely emulate the live Tor network with half a million users.