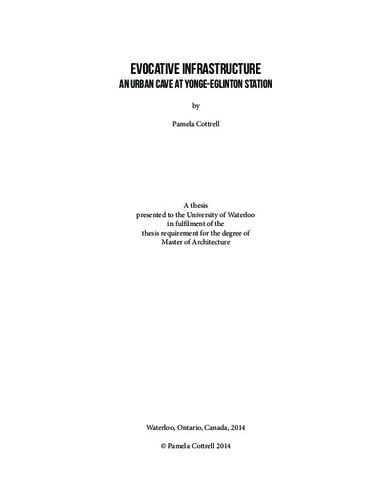 The transition below grade demarcates a portal into a different realm. Underground architecture calls for a unique approach to design. This thesis is interested in looking at underground architecture through a phenomenological approach: looking at the cultural perception of the underground, informed by both physiological and psychological motivators; as well as the cultural expectations and use of the underground in the metropolis. It seeks to answer the question: What defines an architecture which celebrates the conditions inherent in being underground? The downwards descent into the earth carries with it negative cultural associations which have plagued the construction of underground architecture in the past. Due to these negative associations, programs relegated to the underground city typically consist of places where people are not expected to dwell for long periods of time. While the negative associations can be difficult to overcome, there is also a certain magic to the underground found in its more positive associations. These include: fertility of the earth, protection offered by the cave, the advent of technology, and the possibility of a fantastical realm past the portal demarcated by the grade line. These positive affectations have begun to be exploited in more recent architectural precedents. As the underground network of transit stations has become more formally recognized as an important part of the urban realm, more investment is made in the design of these transit stations. The thesis project will explore the role of the underground in Toronto and its impact on its architecture through the design of a new Yonge-Eglinton Station at the intersection of the historic Yonge Subway line and the new Eglinton LRT. This thesis proposes a design which is beautiful for its melding of two dialectic pursuits: the pursuit of an evocative experience, and the pursuit of a functional construction: the urban cave.