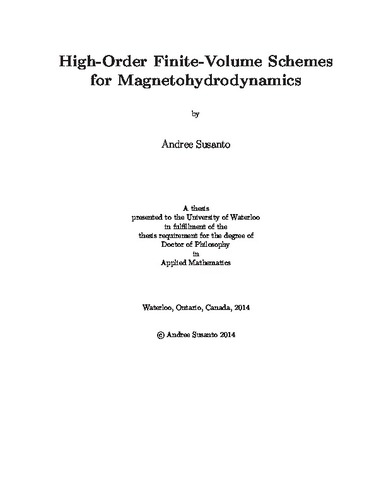 New high-order finite-volume numerical schemes for the magnetohydrodynamics equations are proposed in two and three dimensions. Two different sets of magnetohydrodynamics equations are considered. The first set is the ideal magnetohydrodynamics system, which assumes that the fluid can be treated as a perfect conductor. The second set is resistive MHD, which involves non-zero resistivity. A high-order central essentially nonoscillatory (CENO) approach is employed, which combines unlimited k-exact polynomial reconstruction with a monotonicity preserving scheme. The CENO schemes, which were originally developed for compressible fluid flow, are applied to the MHD equations, along with two possible control mechanisms for divergence error of the magnetic field. The hyperbolic fluxes are calculated by solving a Riemann problem at each cell interface, and elliptic fluxes are computed through k-exact gradient interpolation where point-wise values of the gradients are required. Smooth test problems and test cases with discontinuities (weak or strong) are considered, and convergence studies are presented for both the ideal and resistive MHD systems. Several potential space physics applications are explored. For these simulations, cubed-sphere grids are used to model the interaction of the solar wind with planetary bodies or their satellites. The basic cubed-sphere grid discretizes a simulation domain between two concentric spheres using six root blocks (corresponding to the six faces of a cube). Conditions describing the atmosphere of the inner body can be applied at the boundary of the inner sphere. For some problems we also need to solve equations within the inner sphere, for which we develop a seven-block cubed-sphere grid where the empty space inside the interior sphere is discretized as a seventh root block. We consider lunar flow problems for which we employ the seven-block cubed-sphere mesh. Ideal MHD is solved between the inner and outer spheres of the grid, and the magnetic diffusion equations are solved within the inner sphere, which represents the lunar interior. Two cases are considered: one is without intrinsic magnetic field, where only a wake is expected without any bow shock forming ahead of the Moon, and the second is with a small dipole moment to model a lunar crustal magnetic anomaly, in which case a small-scale magnetosphere is expected ahead of the region with the magnetic anomaly.