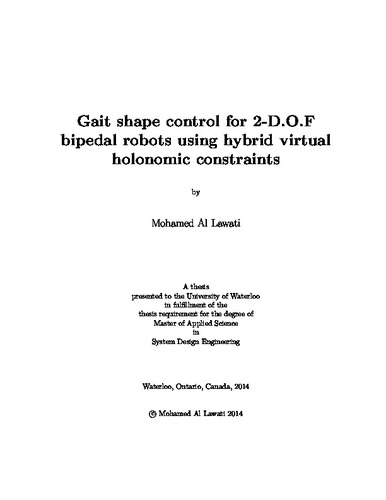 Motion control for bipedal robots is an active research area because bipedal robots can perform tasks and work in terrain where wheeled robots cannot. Researchers have developed bipedal robots that are able to walk, run and perform predefined tasks such as stair climbing. Mimicking human motion is one of the potential benefits of bipedal robots. In the robotics and control literature, many controllers have been presented that achieve dynamically stable gait motions (i.e. stable walking). This thesis studies virtual holonomic constraint (VHC) based control laws that generate stable gaits for 2-DOF bipedal robots. The planar 2-DOF robot under study is modelled as a hybrid automaton and consists of three physical components: a stance leg, a swing leg and a hip mass. The robot is actuated by a hip torque and an ankle torque. For the continuous phase, the dynamics of the robot are similar to a rigid double pendulum except that the robot has an "extra" mass attached to its hip position. At ground impact events, the system's configuration variables are redefined and the associated velocities change instantaneously. The ground is modelled as an inclined surface with no curvature. Due to the hybrid nature of 2-DOF bipedal robots, this thesis extends the notion of VHC to hybrid VHC for a general Euler-Lagrange system with impacts and applies it to a 2-DOF bipedal robot. For any desired gait of the 2-DOF robot, the motion of the swing leg can be expressed as a function of the stance leg. Using this function, a hybrid VHC is generated and the control objective becomes enforcing the hybrid VHC. A design procedure is developed that returns a feasible hybrid VHC for the 2-DOF bipedal robot. The concept of VHC motivates the design of feedback linearizing controllers that drive the states of the robot to a constraint manifold. Feedback linearizing controllers are designed that enforce the hybrid VHC. In this framework, two possible control laws are presented. The first control law generates a fully actuated robot in closed-loop configuration. Sufficient conditions for stability are given and proven. The second control law yields an under-actuated system in closed-loop configuration. This control design is shown to consume no energy as long as the hybrid VHC that models a passive gait is enforced. The stability of this controller is studied numerically through the method of Poincaré sections.