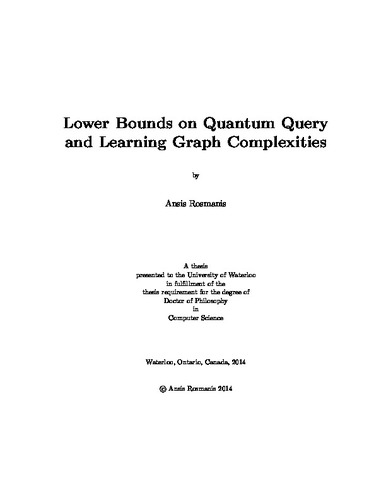 In this thesis we study the power of quantum query algorithms and learning graphs; the latter essentially being very specialized quantum query algorithms themselves. We almost exclusively focus on proving lower bounds for these computational models. First, we study lower bounds on learning graph complexity. We consider two types of learning graphs: adaptive and, more restricted, non-adaptive learning graphs. We express both adaptive and non-adaptive learning graph complexities of Boolean-valued functions (i.e., decision problems) as semidefinite minimization problems, and derive their dual problems. For various functions, we construct feasible solutions to these dual problems, thereby obtaining lower bounds on the learning graph complexity of the functions. Most notably, we prove an almost optimal Omega(n^(9/7)/sqrt(log n)) lower bound on the non-adaptive learning graph complexity of the Triangle problem. We also prove an Omega(n^(1-2^(k-2)/(2^k-1))) lower bound on the adaptive learning graph complexity of the k-Distinctness problem, which matches the complexity of the best known quantum query algorithm for this problem. Second, we construct optimal adversary lower bounds for various decision problems. Our main procedure for constructing them is to embed the adversary matrix into a larger matrix whose properties are easier to analyze. This embedding procedure imposes certain requirements on the size of the input alphabet. We prove optimal Omega(n^(1/3)) adversary lower bounds for the Collision and Set Equality problems, provided that the alphabet size is at least Omega(n^2). An optimal lower bound for Collision was previously proven using the polynomial method, while our lower bound for Set Equality is new. (An optimal lower bound for Set Equality was also independently and at about the same time proven by Zhandry using the polynomial method [arXiv, 2013].) We compare the power of non-adaptive learning graphs and quantum query algorithms that only utilize the knowledge on the possible positions of certificates in the input string. To do that, we introduce a notion of a certificate structure of a decision problem. Using the adversary method and the dual formulation of the learning graph complexity, we show that, for every certificate structure, there exists a decision problem possessing this certificate structure such that its non-adaptive learning graph and quantum query complexities differ by at most a constant multiplicative factor. For a special case of certificate structures, we construct a relatively general class of problems having this property. This construction generalizes the adversary lower bound for the k-Sum problem derived recently by Belovs and Spalek [ACM ITCS, 2013]. We also construct an optimal Omega(n^(2/3)) adversary lower bound for the Element Distinctness problem with minimal non-trivial alphabet size, which equals the length of the input. Due to the strict requirement on the alphabet size, here we cannot use the embedding procedure, and the construction of the adversary matrix heavily relies on the representation theory of the symmetric group. While an optimal lower bound for Element Distinctness using the polynomial method had been proven for any input alphabet, an optimal adversary construction was previously only known for alphabets of size at least Omega(n^2). Finally, we introduce the Enhanced Find-Two problem and we study its query complexity. The Enhanced Find-Two problem is, given n elements such that exactly k of them are marked, find two distinct marked elements using the following resources: (1) one initial copy of the uniform superposition over all marked elements, (2) an oracle that reflects across this superposition, and (3) an oracle that tests if an element is marked. This relational problem arises in the study of quantum proofs of knowledge. We prove that its query complexity is Theta(min{sqrt(n/k),sqrt(k)}).