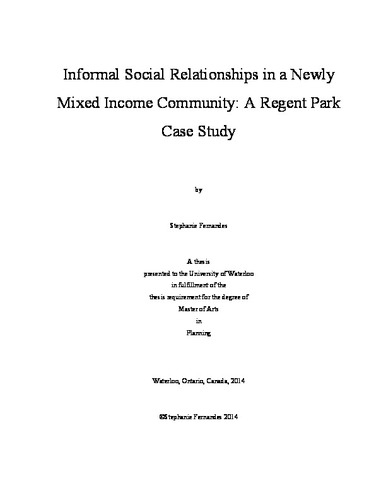 Regent Park is Canada’s oldest and largest public housing project and is currently in the midst of undergoing a fifteen to twenty year phased redevelopment. It opened in the 1950s and was celebrated as family housing. Over time, this neighbourhood became badly stigmatized and socially isolated due in large part to the modernist design principles on which it was built. In 2002, the landlord Toronto Community Housing Corporation began a process of redevelopment in order to transform the neighbourhood into a mixed income community. It is a second chance for planners to rebuild the community, this time according to principles of New Urbanism. In line with the growing trend of social mix housing policy, Regent Park is experiencing redevelopment to include the introduction of market rate housing and simultaneously to increase the quality of life for low income residents. Urban policy has growing support of social mix, yet a dearth of literature supports the phenomenon’s ascribed benefits. This study seeks to assess social mix in Regent Park using public spaces as venues for mixing to occur. In conjunction with housing, the redevelopment includes well-resourced and quality public spaces which are unique additions to the neighbourhood. This qualitative study examines the role that public spaces play in the lives of twenty residents in the newly socially mix neighbourhood of Regent Park. Additionally, seven key informant interviews were conducted to gain a fuller understanding of the intentions behind having public spaces as an integral component of the redevelopment. The purpose of this study is to provide an empirical and descriptive account of a newly socially mixed neighbourhood, so as to inform future implementations of this phenomenon.