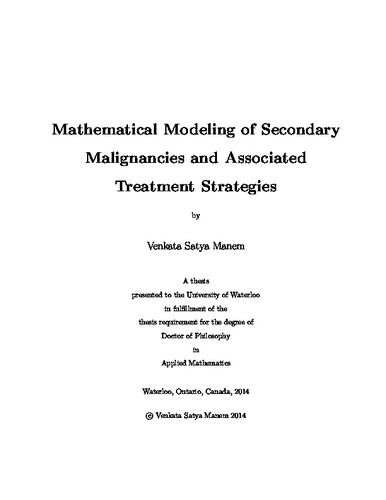 Several scientific and technological advancements in radiation oncology have resulted in dramatic improvements in dose conformity and delivery to the target volumes using external beam radiation therapy (EBRT). However, radiation therapy acts as a double-edged sword leading to drastic side-effects, one of them being secondary malignant neoplasms in cancer survivors. The latency time for the occurrence of second cancers is around $10$-$20$ years. Therefore, it is very important to evaluate the risks associated with various types of clinically relevant radiation treatment protocols, to minimize the second cancer risks to critical structures without impairing treatment to the primary tumor volume. A widely used biologically motivated model (known as the initiation-inactivation-proliferation model) with heterogeneous dose volume distributions of Hodgkin's lymphoma survivors is used to evaluate the excess relative risks (ERR). There has been a paradigm shift in radiation therapy from purely photon therapy to other particle therapies in cancer treatments. The extension of the model to include the dependence of linear energy transfer (LET) on the radio-biological parameters and mutation rate for charged particle therapy is discussed. Due to the increase in the use of combined modality regimens to treat several cancers, it is extremely important to evaluate the second cancer risks associated with these anti-cancer therapies. The extension of the model to include chemotherapy induced effects is also discussed. There have been several clinical studies on early and late relapses of cancerous tumors. A tumor control probability (TCP) model with recurrence dynamics in conjunction with the second cancer model is developed in order to enable design of efficient radiation regimens to increase the tumor control probability and relapse time, and at the same time decrease secondary cancer risks. Evolutionary dynamics has played an important role in modeling cancer progression of primary cancers. Spatial models of evolutionary dynamics are considered to be more appropriate to understand cancer progression for obvious reasons. In this context, a spatial evolutionary framework on lattices and unstructured meshes is developed to investigate the effect of cellular motility on the fixation probability. In the later part of this work, this model is extended to incorporate random fitness distributions into the lattices to explore the dynamics of invasion probability in the presence and absence of migration.