Design of a MOSFET-Based Pulsed Power Supply for Electroporation 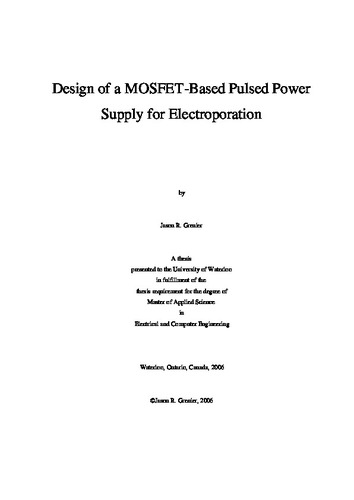 The use of high-voltage pulsed electric fields in biotechnology and medicine has lead to new methods of cancer treatment, gene therapy, drug delivery, and non-thermal inactivation of microorganisms. Regardless of the application, the objective is to open pores in the cell membrane and hence either facilitate the delivery of foreign materials inside the cell or to kill the cell completely. Pulsed power supplies are needed for electroporation, which is the process of applying pulsed electric fields to biological cells to induce a temporary permeability in the cell membrane. The applications of pulsed electric fields are dependent on the output pulse shape and pulse parameters, both of which can be affected by the circuit parameters of the pulsed power supply and the conductivity of the media being treated. <br /><br /> In this research, two Metal Oxide Field Effect Transistor (MOSFET)-based pulsed power supplies that are used for electroporation experiments were designed and built. The first used up to three MOSFETs in parallel to deliver high voltage pulses to highly conductive loads. To produce pulses with higher voltages, a second pulsed power supply using two MOSFETs connected in series was designed and built. The parallel and series MOSFET-based pulsed power supplies are capable of producing controllable square pulses with widths of a few hundred nanoseconds to dc and amplitudes up to 1500 V and 3000 V, respectively. The load in this study is a 1-mm electroporation cuvette filled with a buffer solution that is varied in conductivity from 0. 7 mS/m to 1000 mS/m. The results indicate that by controlling the circuit parameters such as the number of parallel MOSFETs, gate resistance, energy storage capacitance, and the parameters of the MOSFET driver gating pulses, the output pulse parameters can be made almost independent of the load conductivity. <br /><br /> Using the pulsed power supplies designed in this work, an investigation into electroporation-mediated delivery of a plasmid DNA molecule into the pathogenic bacterium <em>E. coli</em> O157:H7, was conducted. It was concluded that increasing the electric field strength and pulse amplitude resulted in an increase in the number of transformants. However, increasing the number of pulses had the effect of reducing the number of transformants. In all of the experiments the number of cells that were inactivated by the exposure to the pulsed electric field was measured.