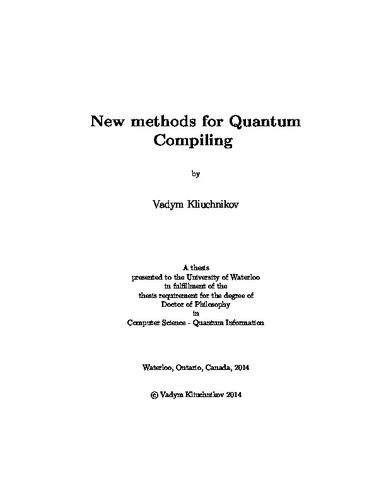 The efficiency of compiling high-level quantum algorithms into instruction sets native to quantum computers defines the moment in the future when we will be able to solve interesting and important problems on quantum computers. In my work I focus on the new methods for compiling single qubit operations that appear in many quantum algorithms into single qubit operations natively supported by several popular architectures. In addition, I study several questions related to synthesis and optimization of multiqubit operations. When studying the single qubit case, I consider two native instruction sets. The first one is Clifford+T; it is supported by conventional quantum computers implementing fault tolerance protocols based on concatenated and surface codes, and by topological quantum computers based on Ising anyons. The second instruction set is the one supported by topological quantum computers based on Fibonacci anyons. I show that in both cases one can use the number theoretic structure of the problem and methods of computational algebraic number theory to achieve improvements over the previous state of the art by factors ranging from 10 to 1000 for instances of the problem interesting in practice. This order of improvement might make certain interesting quantum computations possible several years earlier. The work related to multiqubit operations is on exact synthesis and optimization of Clifford+T and Clifford circuits. I show an exact synthesis algorithm for unitaries generated by Clifford+T circuits requiring exponentially less number of gates than previous state of the art. For Clifford circuits two directions are studied: the algorithm for finding optimal circuits acting on a small number of qubits and heuristics for larger circuits optimization. The techniques developed allows one to reduce the size of encoding and decoding circuits for quantum error correcting codes by 40-50\% and also finds their applications in randomized benchmarking protocols.