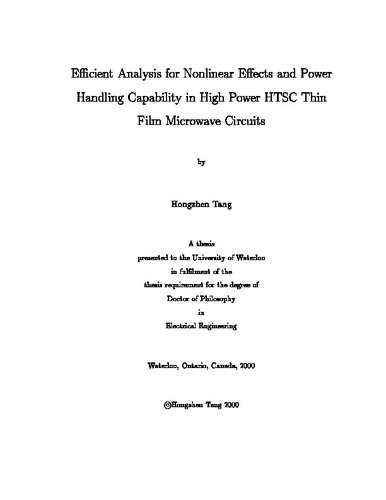 In this study two nonlinear analysis methods are proposed for investigation of nonlinear effects of high temperature superconductive(HTSC) thin film planar microwave circuits. The MoM-HB combination method is based on the combination formulation of the moment method(MoM) and the harmonic balance(HB) technique. It consists of linear and nonlinear solvers. The power series method treats the voltages at higher order frequencies as the excitations at the corresponding frequencies, and the higher order current distributions are then obtained by using the moment method again. The power series method is simple and fast for finding the output power at higher order frequencies. The MoM-HB combination method is suitable for strong nonlinearity, and it can be also used to find the fundamental current redistribution, conductor loss, and the scattering parameters variation at the fundamental frequency. These two proposed methods are efficient, accurate, and suitable for distributed-type HTSC nonlinearity. They can be easily incorporated into commercial EM CAD softwares to expand their capabilities. These two nonlinear analysis method are validated by analyzing a HTSC stripline filter and HTSC antenna dipole circuits. HTSC microstrip lines are then investigated for the nonlinear effects of HTSC material on the current density distribution over the cross section and the conductor loss as a function of the applied power. The HTSC microstrip patch filters are then studied to show that the HTSCinterconnecting line could dominate the behaviors of the circuits at high power. The variation of the transmission and reflection coefficients with the applied power and the third output power are calculated. The HTSC microstrip line structure with gilded edges is proposed for improving the power handling capability of HTSC thin film circuit based on a specified limit of harmonic generation and conductor loss. A general analysis approach suitable for any thickness of gilding layer is developed by integrating the multi-port network theory into aforementioned proposed nonlinear analysis methods. The conductor loss and harmonic generation of the gilded HTSC microstrip line are investigated.