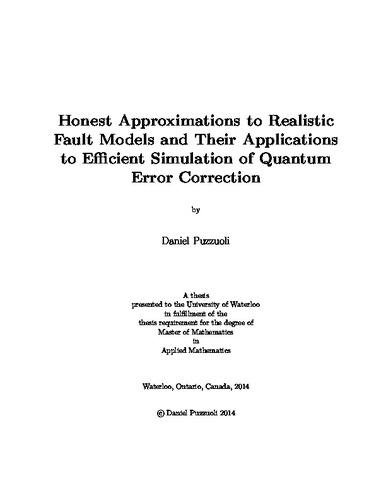 Understanding the performance of realistic noisy encoded circuits is an important task for the development of large-scale practical quantum computers. Specifically, the development of proposals for quantum computation must be well informed by both the qualities of the low-level physical system of choice, and the properties of the high-level quantum error correction and fault-tolerance schemes. Gaining insight into how a particular computation will play out on a physical system is in general a difficult problem, as the classical simulation of arbitrary noisy quantum circuits is inefficient. Nevertheless, important classes of noisy circuits can be simulated efficiently. Such simulations have led to numerical estimates of threshold errors rates and resource estimates in topological codes subject to efficiently simulable error models. This thesis describes and analyzes a method that my collaborators and I have introduced for leveraging efficient simulation techniques to understand the performance of large quantum processors that are subject to errors lying outside of the efficient simulation algorithm's applicability. The idea is to approximate an arbitrary gate error with an error from the efficiently simulable set in a way that ``honestly'' represents the original error's ability to preserve or distort quantum information. After introducing and analyzing the individual gate approximation method, its utility as a means for estimating circuit performance is studied. In particular, the method is tested within the use-case for which it was originally conceived; understanding the performance of a hypothetical physical implementation of a quantum error-correction protocol. It is found that the method performs exactly as desired in all cases. That is, the circuits composed of the approximated error models honestly represent the circuits composed of the errors derived from the physical models.