Sharia and Constraint: Practices, Policies, and Responses to Faith-based Arbitration in Ontario 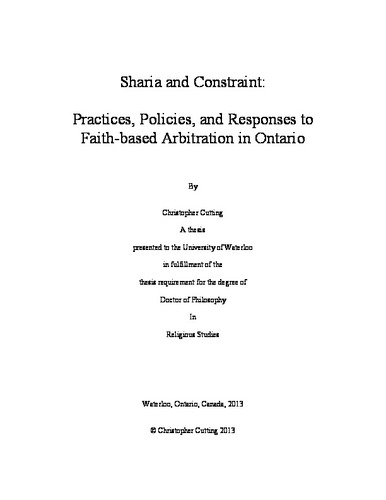 In the fall of 2003 Syed Mumtaz Ali, leader of the Islamic Institute of Civil Justice located in Toronto Ontario announced in a media interview that his institute was in a new position to offer faith based arbitration to Muslims in Ontario in family law matters such as divorce, custody, and wills. This announcement precipitated a media storm. Participants in the public debate on faith based arbitration, or what came to be called the “sharia debate,” worried that vulnerable people such as Muslim women and children might not receive fair treatment by faith based arbitrators. Although, these were legitimate concerns, I argue that much of the public discourse was deeply Islamophobic, and factually wrong in several respects. I argue that the media played an important role in advancing what I call imperial secularism and what others have called colonial feminism. Furthermore, no one knew what was taking place on the ground in Muslim communities with regard to alternative dispute resolution of family law matters generally. My fieldwork research revealed two unanticipated results. First, the vast majority of Muslim adherents seeking out alternative dispute resolution services related to family law matters were Muslim women rather than Muslim men. Second, the vast majority of Muslims seeking out these services were looking for a religious divorce in addition to a civil divorce so that they could remarry within their religious community. They were not on the whole seeking guidance on matters, for example, regarding custody, division of family assets, or support payment amounts upon divorce. The Dalton McGuinty government ultimately decided to ban faith based arbitration, making its announcement on September 11, 2005. However, I argue that due to de facto legal pluralism there are several other avenues for making religious legal traditions legally enforceable, for example, through faith based mediation, if the disputants agree to enter the results of a mediation into a separation agreement. I argue that this apparent oversight of the resulting policy is in part due to a public discourse that treated vulnerable people generally and Muslim women in particular paternalistically as “children” in need of rescue. I argue however that given the realities of Canada’s Family Law Act, it is crucial to develop policy that recognizes vulnerable people as agents, facilitating agency rather than essentially denying it. Furthermore, my fieldwork suggests that many of the practices of Muslim faith mediation are much more reasonable than several participants in the public debate assumed, questioning the Islamophobic tone of the public debate. However, there are still risks in faith based mediation and the like, and for that reason I make several policy recommendations designed to facilitate the agency of vulnerable people to protect themselves. Notably, Orthodox Jewish communities have been using faith based arbitration for several years. Therefore, I conducted research to see how the McGuinty government’s decision affected them. The unanticipated result was that very little had changed in practice for Jewish communities precisely because of de facto legal pluralism. I argue that the Islamophobic discourse of the public “sharia debate” and the limited policy formed following the debate are the result in part of imperial secularism and colonial feminism. Therefore, I argue that anti-imperial secularism and post-secular feminism should be developed within Canada’s larger multicultural framework in order to promote improved public discourse and public policy that treats vulnerable people generally and Muslim women specifically as agents rather than as “children” in need of paternalistic rescue.