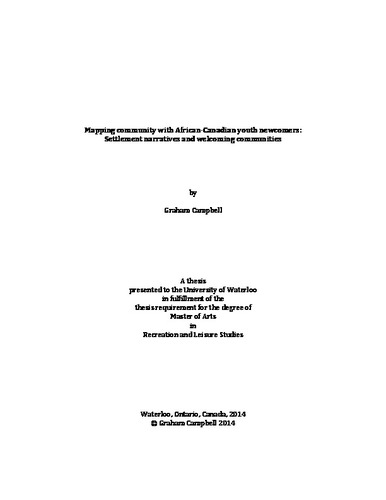 Immigration is important to Canada and Canadian society in many ways. Leading the G8 group of countries with the highest proportion of foreign-born population, immigrants make up an important part of the Canadian economy and society (Statistics Canada, 2013). As noted by several authors, much of the literature surrounding newcomer settlement concentrates on either young children or adults, leaving a gap in research into settlement experiences of adolescents (Anisef & Kilbride, 2003; Berry, Phinney, Sam, & Vedder, 2006; Janzen & Ochocka, 2003; Omidvar & Richmond, 2003). The purpose of this research project is to explore important community places, themes around settlement, and welcoming communities with newcomer youth in the context of stories surrounding maps of their community. The data were collected as part of a larger project exploring engagement of traditionally underrepresented groups in community-based planning practices. Over the course of the three-day African-Canadian Youth Leadership Project in 2011, thirteen immigrant youth participated in leadership and research activities. The current study focuses on data gathered through a cognitive mapping exercise conducted as part of that larger project. Through thematic narrative analysis of interview transcripts, videos, and maps, major themes of home and family, social places, and support networks emerged as being connected to important places in the context of settlement and the perception of a welcoming community. Issues of safety and exclusion were also raised in participants’ stories. These themes are explored as they connect to place, which grounds a discussion of family connections, social capital, and third places contributing to newcomers’ sense of place, and therefore their experience of places in the community. The importance of bridging social capital is also illustrated, including the links to places in the community that share characteristics of Oldenburg’s (1999) third places. Leisure settings were prominent examples of such places in newcomer youth’s stories and maps, often as context for social learning, language skill development, and fostering social connections. Findings show support for Seat’s idea of settlement as being conceived of full engagement in the host society, as well as the feeling of fitting in (2000). Potential benefits of this and similar research include a greater understanding of newcomer youth settlement experiences, contributing to theory and grounding the settlement experience in the concept of place. Issues of bridging social connections and the importance of the community’s role in newcomer engagement might facilitate policy and planning considerations for creating welcoming communities and community places.