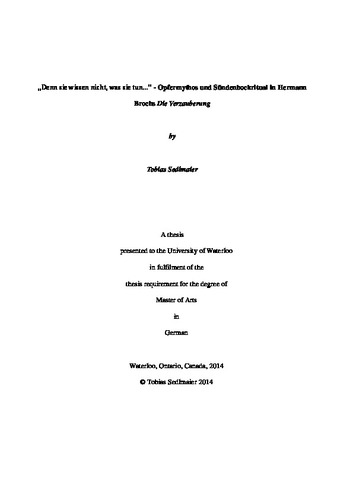 In this thesis I try to examine the role and function of victim and sacrifice in Hermann Broch's novel Die Verzauberung. Since this text has been widely interpreted both with a political and religious approach, my aim is to add a more general perspective on the principles of ritual sacrifice and its depiction in modern literature. An important factor is the setting of the novel which takes place in a small country village. However it does not fulfil the usual genre conventions of a “Dorfroman”. Following the introduction and the research overview, the third chapter of my thesis will deal with how certain ambiguities concerning traditional concepts associated with the genre of “Heimat” are present in the novel. For my analysis I use Renè Girard's theory of the mimetic desire and the scapegoat mechanism, a complex post-structural model which connects mass psychology, anthropological observations, literary studies and biblical criticism. On the basic assumption that society experiences a spiritual crisis together with a threat of uncontrolled violence from time to time and hence uses a ritual of sacrifice to redeem the order, I investigate the different indications the novel gives or leaves out for this systematic interpretation. In conjunction with my analysis of the overall plot, the elements that induce the crisis and the ritual of sacrifice itself, I also scrutinize the central characters: The narrator, Mutter Gisson, Marius Ratti and the two victims, Irmgard and Wetchy. I conclude that there is indeed strong evidence of both behaviour driven by mimetic desire and the scapegoat mechanism. The depicted action can be read as a systematic ritual to restore order and prevent further chaos and aggression. But this goal is not achieved, because the violence within the village continues over the course of several events. The spiritual crisis of the modern world is evident, but the ritual sacrifice is not an effective way to cope with the loss of a “Zentralwert.”