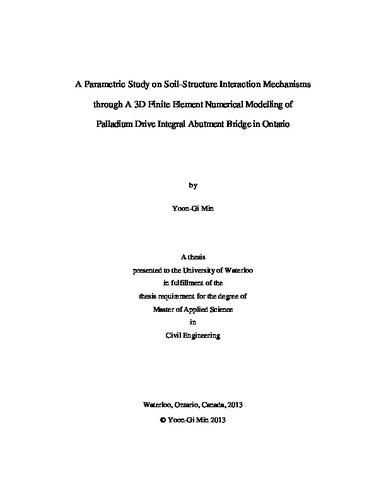 The term “Integral Abutment Bridges” is used broadly all over the world these days. While the expansion joints used in bridges were once a scientifically proved cure to the problem of natural expansion and contraction, there are the excessive maintenance costs being accumulated annually due to the deterioration of essential functions from deicing chemicals and debris. This drawback triggered the advent of Integral Abutment Bridges. The performance of Integral Abutment Bridges at almost no extra costs in seasonal and daily cyclic contraction and expansion can be assessed as a monumental landmark of civil engineering technologies with respect to the massive budget reductions. However, since Integral Abutment Bridges are destined to expand or contract under the laws of nature, the bridge design became more complicated and sophisticated in order to complement the removal of expansion joints. That is why numerous researchers are attracted to Integral Abutment Bridges with deep interests. Accordingly, in designing the piled abutments of Integral bridges, it is essential to precisely predict the bridge’s behavior in advance. Researchers have been broadly carried out during the last several decades on the behavior of piled bridge abutments. However, most of the studies have been analyzed with focus on structural elements or soils, respectively for the static and dynamic loads such as thermal variations and earthquake loads. This presented research developed 3D numerical models with 3 m, 4 m, 5 m, 6 m, 7 m, and 8 m-tall abutments in the bridge using the finite element analysis software MIDAS CIVIL that simulate the behaviors of Integral Abutment Bridges to study the soil-structure interaction mechanism. In addition, this work evaluated and validated the suitability to the limit of the abutment height in Ontario’s recommendations for Integral Abutment Bridges by a parametric study under the combined static loading conditions. In order to be a balanced research in terms of a multidisciplinary study, this research analyzed key facts and issues related to soil-structure interaction mechanisms with both structural and geotechnical concerns. Moreover, the study established an explanatory diagram on soil-structure interaction mechanisms by cyclic thermal movements in Integral Abutment Bridges.