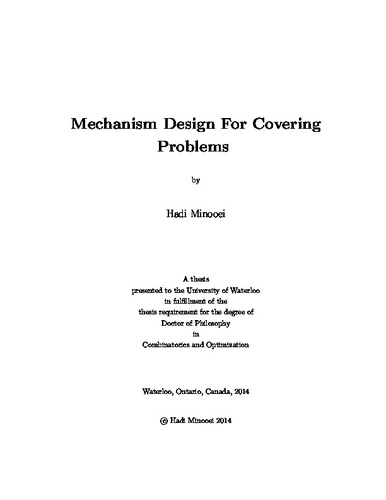 Algorithmic mechanism design deals with efficiently-computable algorithmic constructions in the presence of strategic players who hold the inputs to the problem and may misreport their input if doing so benefits them. Algorithmic mechanism design finds applications in a variety of internet settings such as resource allocation, facility location and e-commerce, such as sponsored search auctions. There is an extensive amount of work in algorithmic mechanism design on packing problems such as single-item auctions, multi-unit auctions and combinatorial auctions. But, surprisingly, covering problems, also called procurement auctions, have almost been completely unexplored, especially in the multidimensional setting. In this thesis, we systematically investigate multidimensional covering mechanism- design problems, wherein there are m items that need to be covered and n players who provide covering objects, with each player i having a private cost for the covering objects he provides. A feasible solution to the covering problem is a collection of covering objects (obtained from the various players) that together cover all items. Two widely considered objectives in mechanism design are: (i) cost-minimization (CM) which aims to minimize the total cost incurred by the players and the mechanism designer; and (ii) payment minimization (PayM), which aims to minimize the payment to players. Covering mechanism design problems turn out to behave quite differently from packing mechanism design problems. In particular, various techniques utilized successfully for packing problems do not perform well for covering mechanism design problems, and this necessitates new approaches and solution concepts. In this thesis we devise various techniques for handling covering mechanism design problems, which yield a variety of results for both the CM and PayM objectives. In our investigation of the CM objective, we focus on two representative covering problems: uncapacitated facility location (UFL) and vertex cover. For multi-dimensional UFL, we give a black-box method to transform any Lagrangian-multiplier-preserving ρ-approximation algorithm for UFL into a truthful-in-expectation, ρ-approximation mechanism. This yields the first result for multi-dimensional UFL, namely a truthful-in-expectation 2-approximation mechanism. For multi-dimensional VCP (Multi-VCP), we develop a decomposition method that reduces the mechanism-design problem into the simpler task of constructing threshold mechanisms, which are a restricted class of truthful mechanisms, for simpler (in terms of graph structure or problem dimension) instances of Multi-VCP. By suitably designing the decomposition and the threshold mechanisms it uses as building blocks, we obtain truthful mechanisms with approximation ratios (n is the number of nodes): (1) O(r2 log n) for r-dimensional VCP; and (2) O(r log n) for r-dimensional VCP on any proper minor-closed family of graphs (which improves to O(log n) if no two neighbors of a node belong to the same player). These are the first truthful mechanisms for Multi-VCP with non-trivial approximation guarantees. For the PayM objective, we work in the oft-used Bayesian setting, where players’ types are drawn from an underlying distribution and may be correlated, and the goal is to minimize the expected total payment made by the mechanism. We consider the problem of designing incentive compatible, ex-post individually rational (IR) mechanisms for covering problems in the above model. The standard notion of incentive compatibility (IC) in such settings is Bayesian incentive compatibility (BIC), but this notion is over-reliant on having precise knowledge of the underlying distribution, which makes it a rather non- robust notion. We formulate a notion of IC that we call robust Bayesian IC (robust BIC) that is substantially more robust than BIC, and develop black-box reductions from robust BIC-mechanism design to algorithm design. This black-box reduction applies to single- dimensional settings even when we only have an LP-relative approximation algorithm for the algorithmic problem. We obtain near-optimal mechanisms for various covering settings including single- and multi-item procurement auctions, various single-dimensional covering problems, and multidimensional facility location problems. Finally, we study the notion of frugality, which considers the PayM objective but in a worst-case setting, where one does not have prior information about the players’ types. We show that some of our mechanisms developed for the CM objective are also good with respect to certain oft-used frugality benchmarks proposed in the literature. We also introduce an alternate benchmark for frugality, which more directly reflects the goal that the mechanism’s payment be close to the best possible payment, and obtain some preliminary results with respect to this benchmark.