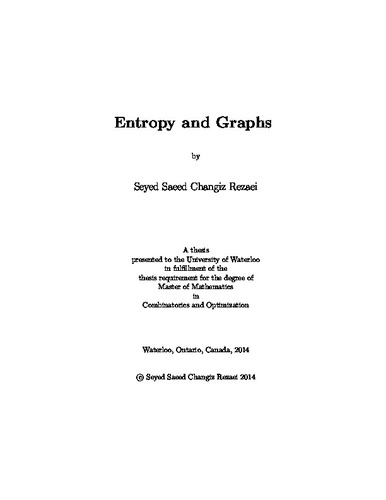 The entropy of a graph is a functional depending both on the graph itself and on a probability distribution on its vertex set. This graph functional originated from the problem of source coding in information theory and was introduced by J. K\"{o}rner in 1973. Although the notion of graph entropy has its roots in information theory, it was proved to be closely related to some classical and frequently studied graph theoretic concepts. For example, it provides an equivalent definition for a graph to be perfect and it can also be applied to obtain lower bounds in graph covering problems. In this thesis, we review and investigate three equivalent definitions of graph entropy and its basic properties. Minimum entropy colouring of a graph was proposed by N. Alon in 1996. We study minimum entropy colouring and its relation to graph entropy. We also discuss the relationship between the entropy and the fractional chromatic number of a graph which was already established in the literature. A graph $G$ is called \emph{symmetric with respect to a functional $F_G(P)$} defined on the set of all the probability distributions on its vertex set if the distribution $P^*$ maximizing $F_G(P)$ is uniform on $V(G)$. Using the combinatorial definition of the entropy of a graph in terms of its vertex packing polytope and the relationship between the graph entropy and fractional chromatic number, we prove that vertex transitive graphs are symmetric with respect to graph entropy. Furthermore, we show that a bipartite graph is symmetric with respect to graph entropy if and only if it has a perfect matching. As a generalization of this result, we characterize some classes of symmetric perfect graphs with respect to graph entropy. Finally, we prove that the line graph of every bridgeless cubic graph is symmetric with respect to graph entropy.