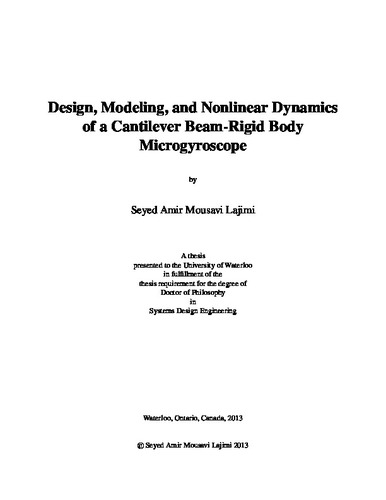 A new type of cantilever beam gyroscope is introduced, modeled, and analyzed. The main structure includes a cantilever beam and a rigid body attached to the free end of the beam. The model accounts for the eccentricity, that is the offset of the center of mass of the rigid body relative to the beam's free end. The first and second moments of mass and the rotary inertia appear in the equations of motion and boundary conditions. The common mechanism of electrostatic actuation of microgyroscopes is used with the difference of computing the force at the center of mass resulting in the electrostatic force and moment in the boundary conditions. By using the extended Hamilton's principle, the method of assumed modes, and Lagrange's differential equations, the equations of motion, boundary conditions, and the discretized model are developed. The generalized model simplifies to other beam gyroscope models by setting the required parameters to zero. Considering the DC and AC components of the actuating and sensing methods, the response is resolved into the static and dynamic components. The static configuration is studied for an increasing DC voltage. For the uncoupled system of equations, the explicit equation relating the DC load and the static configuration is computed and solved for the static configuration of the beam-rigid body in each direction. Including the rotation rate, the stationary analysis is performed, the stationary pull-in voltage is identified, and it is shown that the angular rotation rate does not affect the static configuration. The modal frequencies of the beam-rigid body gyroscope are studied and the instability region due to the rotation rate is computed. It is shown that the gyroscope can operate in the frequency modulation mode and the amplitude modulation mode. To operate the beam-rigid body gyroscope in the frequency modulation mode, the closed-form relation of the observed modal frequency split and the input rotation rate is computed. The calibration curves are generated for a variety of DC loads. It is shown that the scale factor improves by matching the zero rotation rate natural frequencies. The method of multiple scales is used to study the reduced-order nonlinear dynamics of the oscillations around the static equilibrium. The modulation equations, the ``slow'' system, are derived and solved for the steady-state solutions. The computational shooting method is employed to evaluate the results of the perturbation method. The frequency response and force response plots are generated. For combinations of parameters resulting in a single-valued response, the two methods are in excellent agreement. The synchronization of the response occurs in the sense direction for initially mismatched natural frequencies. The global stability of the system is studied by drawing phase-plane diagrams and long-time integration of response trajectories. The separatrices are computed, the jump phenomena is numerically shown, and the dynamic pull-in of the response is demonstrated. The fold bifurcation points are identified and it is shown that the response jumps to the higher/lower branch beyond the bifurcation points in forward/backward sweep of the amplitude and the excitation frequency of AC voltage. The mechanical-thermal (thermomechanical) noise effect on the sense response is characterized by using a linear approximation of the system and the nonlinear "slow" system obtained by using the method of multiple scales. To perform linear analysis, the negligible effect of Coriolis force on the drive amplitude is discarded. The second-order drive resonator is solved for the drive amplitude and phase. Finding the sense response due to the thermal noise force and the Coriolis force and equating them computes the mechanical-thermal noise equivalent rotation rate in terms of system parameters and mode shapes. The noise force is included in the third-order equation of the perturbation and equation to account for that in the reduced-order nonlinear response. The numerical results of linear and reduced-order nonlinear thermal noise analyses agree. It is shown that higher quality factor, higher AC voltage, and operating at lower DC points result in better resolution of the microsensor.